Lotus duo look ahead to Silverstone 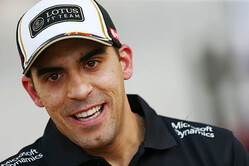 The frustration of retirement in Austria has spurred Romain Grosjean to want more from the team's home Grand Prix at a venue where he has won in the past.

How do you like Silverstone?
Romain Grosjean: It's a fantastic track with a lot of high speed corners. I won there in the GP2 Series in 2011, so I have to say it has fond memories for me. I scored points there in my F1 debut but then for the last couple of years my British Grand Prix hasn't been so good in terms of results. This means I must be due a good result and we'll be doing everything we can to ensure a good finish in the points!

Why is Silverstone rated as one of the favourite circuits for many drivers?
RG: Silverstone is challenging, but it has a really good feeling to it. It's one of the quickest tracks of the year and as drivers we always like to go fast! There are corners which are legendary like the Magotts, Becketts, Chapel complex. It's quite a feeling going through there and I can't wait to feel that sensation once more. The whole layout has a really good, fast flow to it and you can really feel your car working hard with the downforce through the fast flowing corners. It's a happy place to be. It's also a special Grand Prix for the team as the factory is very close to the track. It's always nice to see not only the race team, but also some of the many people from the factory come to see us out in action. It's thanks to all their hard work that we're out on track and they are all doing an amazing job, always working so hard. It really does have a feeling of a home event.

How is it as a driver visiting the factory?
RG: It's still a magical experience as you know there are so many people and so many resources just to make two cars that you and your team-mate will race around the world. It's such a privileged position to be in and everyone at every level in Enstone does an amazing job. This year the team has made a good step back to where we want to be which has been great to see and that's thanks to all the hard work that goes on at Enstone.

What can be challenging about a Silverstone weekend?
RG: Over the years there's been quite a bit of wet weather for the British Grand Prix, and this was not so much of a surprise to the Englishmen I've spoken to! I have lived quite near to the track so my experience of regularly visiting Enstone means that I know the weather can change quite a lot. An English summer's day is wonderful, but sometimes you have to look hard to find one! That said, it's looked pretty good so far this year and there is even talk of something of a heatwave coming to Britain. It's fantastic to be at Silverstone when the weather is good and the fans are all out so let's hope that happens.

Were there any frustrations from your time in Austria?
RG: It was a bit of a frustrating one for me. I didn't finish the race then to add insult to injury, the Austrian weather really mucked me and the team around for the test day! My race retirement was tough to take as we should have scored another good tally of points, but it wasn't to be. The test day was unusual as there was so much rain in the morning, but the conditions changed a lot for the afternoon so we still completed some useful runs. Every time we go out with the E23 we learn a little bit more with it, and the car is a pleasure to drive so I will start the Silverstone weekend in a very positive mood.

As a culinary connoisseur, what's your favourite British food?
RG: For me, I really enjoy pea soup with mint and Aberdeen filet.

Two Seventh-place finishes in the last two races have buoyed Pastor Maldonado who is excited for what he views as a home race in Silverstone.

Points again; tell us about your Austrian Grand Prix.
Pastor Maldonado: It was a good weekend. In the race we made a poor start due to a small issue, but after that I was able to drive a good race. I stayed on the pace of the cars ahead for my first stint, even though I was on the harder tyres, then when I changed to the super softs I was able to push, even though we did a very long stint on those tyres. It was a satisfying race and I was very happy to take seventh position near the end.

How much of a boost does it give you to get two good finishes in from the past two races?
PM: It's good for me and it's good for all of the team. It was frustrating for everyone to be pushing so hard with no reward until Canada, so to score in Canada and Austria has been great. Scoring is what we're all here for so we'll keep pushing for points at every race.

Where do your tyre management skills come from?
PM: I think there are two factors. Firstly, you soon learn as a racing driver that you have to manage your tyres and if you use up all the performance early on you'll suffer later. The other thing I think that helps me is listening to my engineers and doing what they tell me. They have far more data than me so are in a better position to make any decisions either before or during a race.

What did you think of that shimmy in the race?
PM: I've seen it on TV now and it looked pretty good! It was a great battle but I'm glad I was able to finish ahead of Max Verstappen and take seventh place. We were both pushing hard, though it's sometimes a little funny when you read the headlines afterwards and then compare it to what you said. I had no real issue with Max's driving; he was maybe a little over the limit in his defence of position at times but we all do that as racing drivers. If the Stewards watching think the driving was fine then that's fine by me.

What are your thoughts of the British Grand Prix?
PM: I've won at Silverstone in the GP2 Series and I've always really liked the circuit. I've spent so much time in England that it's like a second home to me, especially as I have family who live very close to the circuit in Oxfordshire. It's a great event coming mid-season and it always provides an interesting race. It's always a very special event for the teams based nearby and the support all drivers get there is amazing with some of the most knowledgeable fans in the world. I'm looking forward to racing just down the road from the Lotus F1 Team factory and seeing many familiar faces over the weekend.

What do you think of Silverstone as a circuit?
PM: I think that Silverstone is an amazing track. It has a great history, it's fast and the change to the most recent layout hasn't really changed the nature of the track too much. It's always a special place to visit and you know that you're always there for the racing as it's not on the doorstep of a big city. I have always enjoyed racing at Silverstone since my first visit back in 2007. I also have good memories of it as I have had some great races there, including winning in both 2009 and 2010 in the GP2 Series.

Which parts of the circuit do you like in particular?
PM: My favourite corner is Becketts as it is really quick through there. I think the track will suit our car because it's similar to Barcelona and it's also very fun to drive with sections like Maggots and Becketts which really test you as a driver.

What about the feeling of racing somewhere which so many teams call home?
PM: Certainly, it's home for many, many people who work in the paddock and you do get a special feeling there. The support you get from the fans is amazing; let's hope the weather is too!