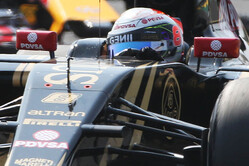 Deputy Team Principal Federico Gastaldi homes in on another double points finish at Silverstone, whilst praising the fighting spirit of Team Enstone.

What's great about the British Grand Prix?
Federico Gastaldi: The Great British Grand Prix really is a fantastic event and one which everyone enjoys visiting. For so many people in motorsport Silverstone is like a home from home and has been part of so many of our histories. It's a great circuit which gives drivers and engineers something to think about and the crowd's enthusiasm and knowledge is legendary; we can't wait for the event to start.

What's the outlook from the team for Silverstone?
FG: I think we can do well. We keep showing the pace of the E23 at different tracks and both Romain and Pastor are doing a superb job. Our race weekends are running quite smoothly, and we will arrive off the back of a positive test in Austria. This year we are arriving at each venue very positive of a decent result and Silverstone is no different.

Will racing at home and so close to the factory be an advantage?
FG: First and foremost it is the home event for the factory and we get so much support from our employees and their friends and families. We'll see so many familiar faces in the crowds and speak to so many people over the course of the event. I know that I'll probably lose my voice by the end of the weekend! Logistically, being down the road from the event certainly can make things easier in terms of time, but the planning and logistics are the same as ever, except for at this race some of the crew can sleep in their own beds for once! From a motivation point of view we never lack that, wherever we race. But there is still an added ambience to a race that is on our doorstep. We want to achieve something for everyone at Enstone to have an extra special spring in their step on the Monday after the British Grand Prix.

How much of a 'home' race is this for you personally?
FG: I have spent a lot of my life in the vicinity of Enstone. There's even an Italian restaurant where I eat regularly where the owner and staff all come join me at my table at the end of the evening! There is some beautiful countryside though I must admit that sometimes I expect to see penguins walking down the street as the weather can get so cold compared to Southern Europe or South America! That said, this year looks very promising indeed for a hot race which puts a smile on my face and warms my heart.

How much would you like to see the team retake fifth spot in the Constructor's Championship at Silverstone?
FG: That would be good. Force India jumped us in Austria, but we did get closer to Red Bull in fourth position. We were unfortunate to have to retire Romain but Pastor showed the pace and potential of our package once more. If we get both cars across the finish line in the points we should make good inroads to the gap to those currently ahead of us. There's still over half of the season left to go, so there is plenty of opportunity for us to move forwards. We will be fighting all the way!

The final test day of 2015 has been and gone; how does this impact on the team's development?
FG: It's certainly different this year with no end of season test, but it's the same for everyone. I know from speaking to our technical department that there are still things to come from the car and we will continue to get faster as the season progresses. Certainly, the feedback was positive after the test in Austria so we're looking forward to putting everything into practice for a super Silverstone weekend!

Technical Director Nick Chester analyses the team's performance in Austria and looks ahead to the British Grand Prix.

The next race is the team's 'home' event: what impact does this have psychologically and logistically?
Nick Chester: Psychologically, the entire team like Silverstone. Having a home Grand Prix on your doorstep is very motivating. It's a good track and it's nice to have it so close to the factory and to people's homes so not everybody stays in a hotel which makes a nice change for them. Logistically, it's also so much easier - being only 45 minutes away from Enstone, we can get everything there and back in no time. It's quite a big advantage.

What are the characteristics of the Silverstone circuit, and how much of a challenge should they present the E23 with?
NC: Silverstone represents a good challenge. The circuit has a lot of high speed corners and also some good low and medium speed corners, a real nice mix. It also presents reasonable straights meaning that there is a power sensitivity to Silverstone as well. It's a real challenge with the different characteristics of corners and to get the car to work well in all of them. In terms of parts, we tested a few small updates in Spielberg that we'll be taking to Silverstone.

The Pirelli tyre allocation moves from the softest pairing to the hardest - could this have an impact on how the team could perform in Silverstone?
NC: It shouldn't make a big difference. We tended to like the softer compounds a bit better but we are able to generate reasonable tyre warm up on most of the tyres now. Colder weather might have a small impact on how quickly we'll be able to get the harder compounds to temperature but we have made a good step forward compared to last year in this area.

Romain experienced two gearbox-connected issues in Austria, were they related? And what's the team doing to avoid these type of issues in the future?
NC: Romain had an issue with the hydraulic system in qualifying and then he had a problem with fourth gear in the race, however the issues weren't related. We have identified the causes and are now rectifying them to avoid these issues going forward.

Pastor drove a strong race in Austria...
NC: He drove really well and probably one of the best races I have seen him drive. The race start was a bit tricky but then he just drove through and picked up places aggressively but fairly and he backed out of manoeuvres at the right times. When he started the overtaking move on Max Verstappen he had the DRS open so quite a lot less rear downforce which can make it a bit tricky. Pastor did everything right.

The team lost fifth place in the Constructors' Championship in Austria, but the battle is close: can we expect a fightback?
NC: Definitely. Our qualifying wasn't as good as it could have been and Romain had to retire in the race. In general we expected to be in front of Force India but we pulled away from Torro Rosso and Sauber. We fully expect to get these points back. The E23 is going well and a clear weekend should enable us to score some good points.

The squad made two very impressive pit stops in Austria and this is an area where the team really has made great steps over the past few years - how so?
NC: The steps have been gradual. We have put a lot of effort into the pitstops. The crew does an enormous amount of practicing - we had done about 500 practice stops over the winter, we practice every day, twice a day when the team is in Enstone and then daily at the circuits as well. We put a lot of effort in it and I think that over the past couple of years we've managed to really improve and perfect our pit stops.

How much progress was made in the Austrian test?
NC: Despite the first half day being a complete washout, we then still had a reasonable afternoon and did a good amount of aero data logging. We can do this type of data collection when the conditions aren't perfect and it was helpful in terms of understanding our aero package. In the end, we pretty much hit our targets at the test and completed our programme. We did a lot of mechanical set-up work also ahead of the British Grand Prix. All in all it was a useful test despite the heavy rain experienced on the first morning.