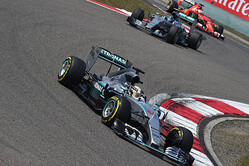 Even as the World Motor Sport Council meets in Mexico City to discuss suggestions put forward by the F1 Strategy Group with a view to improving the sport, Bernie Ecclestone believes an even greater revolution is needed.

As pointed out in the Pitpass podcast, whilst Sunday's British Grand Prix was entertaining, the fact is that at the end of the day Mercedes scored its sixth 1-2 of the year and for the sixth time this season the same three men stood on the podium.

Whilst the race has silenced the critics, and stopped the (media) negativity, for a few days, once the racing resumes on tracks such as the Hungaroring the drama of Silverstone will soon be forgotten.

Former FIA president Max Mosley warns that the sport is heading for a major crisis, whilst his successor insists it is only suffering a headache. F1 supremo Bernie Ecclestone, a long-time critic of the new formula believes a complete overhaul is needed.

"If I had a clean sheet piece of paper the first thing I would do is make an engine that is not as complicated as the current one is," he told the Guardian.

"We need another Cosworth to supply teams," he added, ironic really considering the last three teams to enter the sport (in 2010) were effectively ordered to use Cosworth engines, the legendary manufacturer opting not to continue when the new formula was introduced last year.

"If we had a simpler engine it would allow other people who wanted to make engines to come in," he insisted. "Look at Toyota, who I know - maybe - would be interested in coming back into Formula One.

"But no way would they come back with this power unit. They know that they would be in trouble before they start. If Ferrari are in trouble what chance have they got?" Again an interesting comment, if you know your F1 history, or are a devotee of Mike Lawrence.

"Mercedes have got a super team, a super engine which is an incredible piece of engineering," he admitted. "But if you and I and go the grandstand and ask a spectator 'How many cylinders has that engine got?' one or two might get it right. And then you ask them what capacity it is. They don't know, and they don't care. They couldn't care less.

"They want to see Williams winning, Ferrari winning, Red Bull winning - they want everybody to have a chance of winning. At the moment people like Vijay at Force India spend an awful lot of money and have got zero chance of winning. And it's not on. Let's tear the bloody rule book up and start again."

In his quest for a 'new F1', Ecclestone claims to have the support of the drivers, who, he says, are unhappy with the current formula.

"I speak closely to most of the guys and they say the same thing, 'It aint any fun any more'. Because they're on the limit but they're not on their limit, if you know what I mean.

"When you get in a car and you're on it and somebody says 'be careful, you're going to run out of fuel!' We're not a sport for saving fuel.

Whilst he still wields enormous power, the fact is that Ecclestone no longer has the control he once enjoyed. Other than the fact that the sport is owned by CVC and others, there is the small matter of Jean Todt.

Whilst Ecclestone was keen for him to succeed Max Mosley, it is clear that like the former FIA president, things haven't worked out quite as expected.

"The trouble is we have an FIA president who wants everyone to agree. And that's not possible," said Ecclestone. "We don't want to have to have a committee before you do something. That's what we've got, and you're never going to do anything that way.

"We need someone who will turn the lights on and off, whoever that is. But it's going to happen. We're going to make it happen."