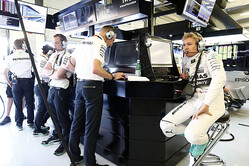 Mercedes has been officially reprimanded for breaching rules during FP1

The German team was called before the stewards after it covered Nico Rosberg's car after it suffered a hydraulics issue which left it stranded on track. Once back in the pitlane, team members covered the car, a breach of the rules which state that a car may only be covered if it has suffered accident damage.

Deeming that Mercedes had indeed covered the car after it was returned to the paddock, a breach of Article 27.4 of the FIA Formula One Sporting Regulations, the team was officially reprimanded.