The art of pit stops 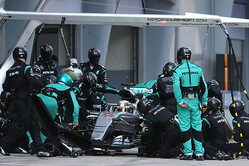 It's easy to believe that pit stops are all about speed and, of course, every team works hard to push for the fastest possible times. But speed should never come at the cost of reliability. In practice, a top crew can change all four wheels in around two seconds. However, finding a tenth here and there in the stop makes little difference relative to the potential loss through an error. If a wheel is not correctly attached at the first attempt, a number of scenarios can emerge. If the crew notices the error in time, the car will be held longer in the box while the wheel nut is re-attached, costing time and likely track position. If the car leaves the box with a loose wheel but stops in pit lane or makes it back around the lap, an unsafe release penalty will apply. This will be, at a minimum, a 10 second stop-and-go penalty, with the possibility of a grid penalty at the following race also being imposed. Or, in the worst-case scenario, the wheel detaches completely and the car is forced to retire. These are the sorts of situations teams must try to mitigate against.

The most comprehensive measurement of pit stop performance is not simply the length of time spent in the box itself - but between the timing beams on pit lane entry and exit. These are the same for everyone and provide a uniform analysis of the time taken to complete a full pit stop procedure, covering both team and driver performance. The times highlighted on TV are clocked using the naked eye and a stopwatch. They also tend to highlight the single aspect of time spent in the box as the key element of a stop. However, by the timing beams, the average ranking across all races of the 2015 season so far sees the Mercedes AMG Petronas crew leading the way.

Pit stops are possibly the most visual evidence of why Formula One is a team sport. For the driver, they're being asked to position the car accurately to within half a wheel diameter - or the size of a standard office ruler - at up to 80km/h without locking up. This really is a phenomenal display of car control. For the crew, they are required to keep their cool under intense pressure while knelt on the ground, inches away from a car approaching at the sort of speed a truck would do on a motorway. The people around the car during a pit stop don't change depending on the driver. They're a collection of crew members spanning a variety of roles within the race team. Not only do they undertake physical training to prepare for the demands of performing a sequence of good stops, they also carry out quite literally thousands of practice stops every season. A good, clean, safe stop requires total trust and confidence from all parties moving in unison. When a pit crew has confidence, that's when they start to naturally build up speed. Reliability builds confidence, confidence builds speed.

There are three main elements to driver pit stop performance. The first is how accurately they can brake to the limiter line. In the ideal scenario, speed has been stable for a tenth or two as the car crosses that marker. Braking too early requires acceleration back up to the limit, braking too late will mean the car does not slow sufficiently to cross the line under the limit. The second element is braking into the box - enough to stop on the marks but not so early that the driver has to come off the brakes and then back onto them. Finally, there is the start from the box. The most crucial of these, however, is the entry to the box itself. Between a driver who comes into the box smoothly without locking the wheels and one who locks up and stops long, the difference can be significant. Stopping 30cm long, for example, can cost up to eight tenths.

If the car is off the marks by enough distance in any direction, the entire crew must adjust their positions accordingly, which costs time. As mentioned previously, the worst case is stopping too long. 30cm, which would be classed as a long way out of position, is a significant distance relative to the reach of an average human arm. At this discrepancy, the human ability to correct for the error disappears. The prime example is the gun men, as the wheel nut is now physically further out of their natural reach. In the most extreme case the gun men have to drop the gun from position, shuffle along by 15-20cm on their knees, bring the gun back up to position and connect to the nut.

Pit lane speed limits are another area of variation. Drivers are limited to 60km/h rather than 80km/h at certain events as it is too dangerous to be running any faster - and times will generally be longer as a result. In Melbourne, where the 60km/h limit is enforced for 289m, the loss is 21 seconds. In Montreal - a pit lane limited to 80km/h for 417m - that loss is just 17 seconds. Where races are border line on strategy, this becomes significant. Depending on track position, at some circuits it may be faster over a race distance to do more laps on a worn set of tyres than make an extra stop, as the pit lane loss is simply too great. The opposite is true of somewhere like Montreal, where pit lane time is quick enough to open up strategic options where the difference is marginal.

Differences in grip levels from the pit lane surface itself can also be a factor. Singapore gives the best traction of any pit lane on the calendar. Here, the organisers cover the ground with a layer of paint, followed by a sand-like material, then seal it all in with more paint. It's like driving on sandpaper, giving excellent grip. Other circuits, particularly those which are not used too often, can start with very low levels of grip at the beginning of a weekend. Performing pit stops will naturally aid this by ensuring more rubber is laid down - however in certain cases the drivers are requested to perform burnouts in the box to lay extra rubber down.