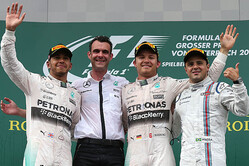 Nico congratulations. My first question is: Nico why you don't drive every race like this?
Nico Rosberg: I will try from now on, I promise!

I have to say you did a brilliant start, that's where you really made it until the first corner, and then I saw you coming into the pits and I say 'shit, that's really on the limit'. You blocked all four wheels; you went sideways on the line, just. I say 'well, that's close to a penalty' but you did it well. You were pushing from the first [corner] until the end. Tell us how did you feel it and how do you feel today?
NR: It's an awesome feeling, of course, to win again here. Very, very happy. The start made the race. It was a great start and I managed to defend in the first couple of corners and then I really just tried to push flat out this time. I was really happy with the car and happy to see the gap open up to Lewis, so it really worked out perfectly today.

Well done, Lewis…
NR: Nico, but it's easy to confuse us!

Ah, Nico. Well done, let's go to Lewis. Lewis, you are one of the quickest guys I've ever seen in Formula One. You are really great. You have a quick car. But you must say, well, that you have a headache in the team. Whenever, you think you are just going away, winning the championship, he's coming back again and he's fighting back and again and keep you honest. I think it's great to watch you both…
Lewis Hamilton: It's great to see your enthusiasm man. It's really great to see your enthusiasm. Nico did a fantastic job today. At the end of the day, he was quicker during the race. I had a really bad start, which obviously lost me ground and after that I was just really pushing as hard as I could. I think in the second stint it was really just about making the distance and that's what I was trying to do.

We are watching you and you guys are really giving everything - you can see lap-by-lap, it's qualifying every lap. I think it's really great to see you both fighting since the karting time up to the Formula One.
LH: It's been a long time.

Felipe - old men! When I saw Sebastian catching you, I said, 'well, Felipe is very, very experienced, has a Mercedes engine in the back, he's going to be very difficult to overtake'. So Sebastian is waiting always for a mistake or a problem on the Mercedes side and Felipe is always just in the back of Sebastian on the Ferrari, see how he can put himself into next position. He did a fantastic job. But you are every year going extremely well here in Austria. What is it motivating you here? Is it the dirndls of the girls on the starting grid?
Felipe Massa: Yeah, maybe, I don't know. For sure it's great people here supporting. It's always fantastic to be here. I think it was a fantastic race today. So we managed to get Sebastian, with his problem that he had in his pit stop, which I didn't see, I don't know what's happened, but I managed to pass him there. I understood that maybe at the end of the race he would be behind me, because they were maybe one or two tenths quicker every lap. At the end he got there and I juts managed to keep the line and not making any mistake, just using a little bit of experience and I'm so happy. It was an amazing race and it was a fantastic result for the whole team, so happy.

I think, Felipe, there was a lot of experience involved, because I saw you fighting the tyres, you were a little bit off-line already in some corners but you kept in front. Well done.
FM: Thank you.

Nico, many congratulations, a fantastic start from you, set you up for that win. You did sound a little worried on the radio towards the end. That chequered flag couldn't come soon enough I guess?
NR: It was just a vibration picking up on the right front. So, just telling them to keep an eye on it - but it was fine in the end. It sort-of stabilised so it was not a problem. It just came from the tyre wear and just feels a bit uncomfortable when that happens - but, no, it was all fine.

You've got a one hundred per cent record around this track that a lot of people describe as 'difficult'. Why is it you're so good around here?
NR: I don't know if there's a trend on this track or anything. It's just today was just a great day. Good start and then good pace also in the race - and that's what I'm most happy about. The car felt good, I was able to push from the first lap onwards all the way, so that's cool. I think this year I found what I needed to find last year in terms of race, y'know, and just doing a little bit better in the races and that's really working out for me this year.

Lewis, a tough start for you, not the start you would have wanted. Just talk us through how your race unfolded from there.
LH: It was pretty straightforward there. Just keeping up with Nico in the first stint, and then in the second stint Nico generally had better pace so he did a fantastic job today, so congratulations to him and otherwise it was just bringing the car home.

What happened at the start?
LH: I had a problem with the wait revs. I took my foot off the gas and it was still on - like the throttle was still on - and then I dumped the clutch and just lots and lots of wheelspin. So, it's, y'know, not the best way to start the race - but something we will work on to improve on my side of the garage.

Felipe, a thousand career points now, your son even predicted you'd finish third today - but talk us through those final laps as well as your race when you knew that Sebastian was bearing down on you.
FM: Yeah, I think it was a great result today. So we managed to get the opportunities, which it was a mistake of another team or Sebastian, I don't know what's happened so I cannot say, but enough, and we managed to keep the pace, which was good - but maybe a little bit slower compared to him. I expect him to be close to me at the end of the race and he was but I managed to keep him behind which was the most important thing, so I'm so happy for our results today, working for the team and everything. My son said I was going to finish third so he's right and, yeah, just hope we can celebrate after this interview.

A third and a fifth for the team today though, that's some important points over Ferrari as well, isn't it?
FM: Yeah, I think it was very good for the team. It was important points against Ferrari, also, looking what's happened to Kimi today. So, we are not giving up, we will fight until the end. We understand that maybe they have a little bit of a quicker car compared to us but we are working very hard to improve and to be there and really trying to get back the points that they are in front, which is not easy but it is what we're trying.