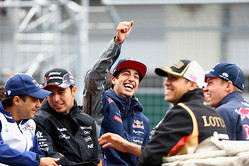 Whilst Lewis Hamilton took a convincing pole position on Saturday, which if nothing else allowed sections of the media to celebrate a year of Mercedes poles, let's not forget that for much of the weekend he has looked slightly uncomfortable here.

Indeed, let's not forget that until his own mishap on that final qualifying run, Nico Rosberg looked set to spoil his teammate's party.

Of course, at the other end of the grid there is no party, the Red Bull and McLaren drivers as confused as to where on the grid they start - after the application of all those penalties - as guests at a banquet where no official seating arrangement has been provided.

Last night we tweeted that: "As @McLarenF1 ponder another engine change, @JensonButton Button may be forced to do first 5 laps of #AustriaGP on foot"

If it wasn't all so utterly pathetic and damaging to the sport it would be funny.

Fact is, after the tedium of Montreal we need a good 'un, especially as this circuit, like the Circuit Gilles Villeneuve, has provided so many classics in the past.

In the final stages of this morning's GP2 race there were some sports of rain but nothing serious, however, with overnight rain (again), there is (hopefully) more of the wet stuff to follow.

Two hours before the start we tweeted that we think Rosberg will win, the German having looked confident all weekend, though the way countryman Nico Hulkenberg is performing at present maybe he could do something special... with a little help from the weather gods.

Not for the first time it was mixed qualifying session for Ferrari, Sebastian Vettel doing a sterling job of putting the F-15T third on the grid. However, Kimi Raikkonen blames the team for a lack of information which meant he was unable to complete another lap and therefore failed to make it to Q2. We're sure the Finn will give a good performance this afternoon, but why does he have to make it so difficult for himself and at the same time alienate his team?

On the other hand, Vettel should be able to give the Mercedes duo a run for their money, Hamilton, in particular, admitting that he fears the ever-improving red cars.

Williams - indeed, all Mercedes powered cars will be strong here - and Felipe Massa and Valtteri Bottas must head into this afternoon's race feeling very confident. The Brazilian, in particular, needing a decent points haul.

With Hulkenberg a superb fifth on the grid, following what was an admittedly crazy qualifying session, mixed emotions for Force India also as Sergio Perez starts from thirteenth.

In fact the Mexican qualified sixteenth, but courtesy of all those penalties...

Strong performances (again) from both Toro Rosso drivers, however, it was Verstappen who made it to Q3 and will start from seventh. Whilst Sainz feels he will be, like his teammate, a "sitting duck" following changes made to his car in anticipation of a wet qualifying, we can expect another strong performance from the Spaniard.

Another star of qualifying was Felipe Nasr, the Brazilian putting his Sauber on eighth. Whether this can be converted into a decent points haul however remains to be seen.

Truth be told, the Lotus duo was expecting to be higher up the grid, Romain Grosjean's cause not helped by a technical issue which meant he was unable to run in Q3. Nonetheless, we are confident the Enstone team will not go home empty handed.

For Red Bull it will be another difficult day, the power shortcomings of the Renault very obvious here. However, the Austrian outfit's problems are nothing compared to McLaren which has admitted that today will be treated like a glorified test session.

Other than their grid penalties, or rather because of their penalties which could be served in full, Ricciardo, Alonso and Button all face time penalties, the Australian will need to stop for 5s at his first pit stop, the Spaniard gets a drive-through and the Briton a 10s stop and go. Got that?

With no sign of its 2015 car, indeed many believe there is no such thing, Manor will target getting both drivers home, no doubt hoping for a helping hand from the weather gods.

Even if the weather gods opt not to play a part in today's activities and the race turns out to be as much of damp squib as Canada, there are plenty of fireworks in the paddock as fans' disenchantment with F1 finally begins to hit home.

Last year's event was a sell-out and it will be interesting to see how many unfilled seats there are this afternoon. The news that Silverstone is currently offering a 44% discount (Hamilton's race number) is worrying, especially when you consider it used to be one of those races that sold-out (in the old fashioned term) early.

Some would use the word 'crisis', others might feel that to be a tad over the top. Fact is, fan interest in F1 is falling, as opposed to discontent.

The penalties meted out this weekend will not have helped, not Dietrich Mateschitz renewal of his threat to walk away. Then there is the recent criticism by a number of highly respected drivers and former drivers.