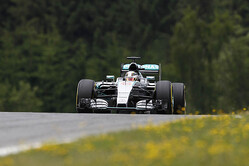 Whilst the weather gods might have spared us yesterday, this morning they decided to have some fun.

Shortly after the driver started making the switch to the option tyres, Fernando Alonso ground to a halt on the pit straight his McLaren having encountered yet another 'issue'.

Once the car had been removed from the track, and with the Mercedes and Ferrari duos waiting at the end of the pitlane, along with Verstappen, the heavens opened up.

Having made it safely back to the pits, following a few unplanned excursions, the intrepid quintet joined their colleagues and waited for conditions to improve. They didn't.

Consequently, amidst claims that qualifying would be held in similar conditions, one by one the drivers returned to the track. There followed around fifteen minutes of pure F1, the sort of thing that first attracted us to the sport, men doing things in cars that the rest of us can only dream of.

Whilst there were plenty of offs, spins and slides there was no serious damage, and, not for the first time, the stars that are Verstappen and Sainz shone brightest.

For reasons best known to themselves, Hamilton and the Lotus and Manor duos opted not to run, an odd decision considering that not only could there be further rain over the next hour but during tomorrow's race.

In the dry, Ferrari is very much on the pace here, indeed, the red cars are putting serious pressure on Mercedes. Whilst second quickest this morning, Hamilton has not had it easy this weekend and doesn't look comfortable here.

All the Mercedes-powered cars look strong here, and consequently, whatever the conditions, we can expect surprises from Lotus and Force India, whilst Williams should be able to build on its Montreal success.

As widely anticipated, both Red Bull drivers have incurred penalties after the team opted to change its engines however, the demotions pale into insignificance compared to the hit the McLaren duo is taking, both drivers clobbered by massive 25-place penalties.

Just ahead of Q1, the air temperature is 12 degrees C, whilst the track temperature is 21 degrees. It has stopped raining but it remains wet, with the threat (30%) of further rain to follow.

The lights go green and Ericsson leads the way, followed by Stevens. Hamilton is another 'early riser'. All are on inters.

"The main straights are dry," says Verstappen, "it is just the corners that are a bit wet." "I think it will be slicks," adds Sainz.

Ericsson posts 25.883 but this is instantly beaten by Verstappen who crosses the line at 21.006. Perez runs wide at T1, one of several drivers that have been catching drivers out all weekend.

Having gone third (21.821), Hamilton looks set to improve next time around. Raikkonen is also on track... unlike Maldonado who goes wide in T1.

Stevens does well to extricate himself from the kitty litter, as Raikkonen improves to third with a 21.041.

As Verstappen goes quickest (19.814), Nasr is the first driver to switch to slicks (options). All eyes on the Brazilian in the Sauber. Massa and Bottas on primes.

"Tyres are suffering quite a lot," warns Vettel as Verstappen goes quickest again (18.677).

Nasr goes seventh with a 20.344, but immediately goes quickest in S1 of his next lap.

All but Vettel on options now, though, it has to be said, the German is not on track. That said, he heads down the pitlane... on options.

Perez is in the drop zone, along with Alonso and Kvyat, with less than a minute remaining.

As Alonso and Kvyat improve, Raikkonen drops to eighteenth, he's out.

A crazy opening phases comes to an end with Raikkonen falling at the first hurdle, along with Perez, Button and the Manors. Disaster for Ferrari and the Iceman.

The lights go green for Q2 and with some ominous dark clouds moving in there is a mad scramble to get back on track. All are on options.

Sainz gets the ball rolling with a 16.366 but this is beaten in no time at all, the first wave seeing Hulkenberg quickest (10.207) ahead of Verstappen and Rosberg. The three are covered by 0.052s. All are on track bar Vettel.

Alonso, currently tenth, is the only driver on track.

One by one they emerge from their garages, Vettel amongst them.

Hamilton goes quickest in S1, while Vettel is quickest in S2. The German subsequently crosses the line at 9.392 but this is soon beaten by Rosberg (9.309), whilst Hamilton has a very poor S3 and fails to improve.

Ricciardo, in the drop zone, runs wide at T3 as Hamilton is told he will need another flying lap.

Massa improves to fifth as the Mercedes duo trade fastest sector times. The German improves to 8.634 while Hamilton posts 9.062.

A late charge sees Grosjean go ninth whilst Maldonado misses the cut. Kvyat takes tenth by the skin of his teeth, whilst teammate Ricciardo also falls at the second hurdle.

The lights go green it is a couple of minutes before an engine bursts into life. It is Bottas'.

The Finn heads down the pitlane, followed by Nasr, Rosberg, Massa and Kvyat.

Hulkenberg goes third, ahead of Nasr, as Vettel finally leaves the pits.

Massa improves but remains third however, a 9.288 from his teammate sees the Finn drop to fourth.

Verstappen and Grosjean clearly going for a single run.

Nasr, Verstappen and Massa are first out for the final assault.

A scrappy lap from Hulkenberg as Vettel posts a PB in S1. PB from Rosberg also but no purples.
As Rosberg goes quickest in S2, Hamilton spins off at T1. All eyes on Rosberg who goes off at T9. In the Mercedes garage Toto Wolff can't help but smile, Niki Lauda also.