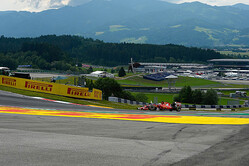 Despite skies that threatened rain, both free practice sessions today remained dry, with FP2 – run at the same time as the qualifying and the race – getting underway with 22 degrees of asphalt temperature and lately reaching 25°.

The rapid warm-up of the supersoft tyre meant that drivers were able to extract the maximum performance from the compound straight away, even though conditions remained ‘green' and slippery during the first free practice session in particular, during which only the soft tyre was used.

Ferrari driver Kimi Raikkonen was the first to try the supersoft tyre this afternoon, 30 minutes into the hour and a half session. As more drivers switched to the softer compound for race and qualifying simulations, a performance gap of 0.7 second between the two tyres was recorded.

Tyre wear and degradation was low during both sessions, and is set to decrease for the rest of the weekend as more rubber is laid down and the cars slide less.
However, there is a risk of rain throughout the rest of the weekend – particularly for tomorrow's qualifying session – that could have a profound effect on race strategy, with the only up to data from the circuit existing from last year, when Austria returned to the championship.

As a result, teams sought to maximise the dry running today and run through as many different scenarios as possible, in order to be as best prepared as they can be for any possibility.

Paul Hembery: "It's a short lap here at the Red Bull Ring, taking less than 70 seconds to complete. We've seen the load on the tyres to be quite low, and a performance gap of 0.7 second between the two compounds. The biggest factor though will be the weather: there's a risk of rain tomorrow and a slightly smaller possibility of rain on race day. This would clearly have a major effect on tactics, so all the signs are for an unpredictable weekend."