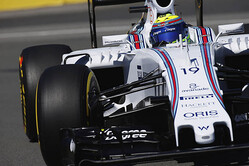 Felipe qualified fourth and Valtteri sixth for tomorrow's Austrian Grand Prix. After making it through a damp Q1, the track conditions improved every lap. Both cars set times on the option tyre in Q3 before their final runs were disrupted by yellow flags.

Valtteri Bottas: Sixth isn't totally representative of the pace of the car considering there is only one Ferrari in front. We suffered a lot with the yellow flags and so I am a little disappointed with where we will start from tomorrow. Saying that though, we have a very quick car in race trim and so can still have a good fight for the positions ahead.

Rob Smedley, Head of Performance Engineering: It was a mixed qualifying session with the drying track making it important to make fewer mistakes than those around us, which we did. We have got the cars in a reasonable position for the race tomorrow, and the team and car have been performing well throughout the weekend. We were let down a little by the yellow flags today, but there is potential for a good result tomorrow.