A knighthood for Patrick Head 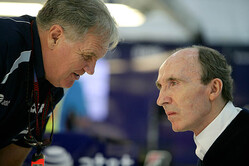 Patrick Head, the co-founder of Williams and long term Technical Director before his retirement in 2011, has been knighted for his services to motorsport.

Sir Patrick, as he will now be known, graduated from University College London in 1970 with a degree in Mechanical Engineering. He immediately joined the chassis manufacturer, Lola, and in 1976 was approached by Frank Williams to spearhead the design department of what became, the following year, Williams Grand Prix Engineering.

In 1978 the Head-designed FW06 made its race debut. The ground effect FW07 came next and the car took the first of the team's 113 wins at the 1979 British Grand Prix. Four more victories followed that season, resulting in Williams finishing second in the Constructors' Championship.

Head's 1980 car took Alan Jones and the team to both world titles, securing Williams as a front-runner. As more success followed in the '80s, he moved away from designing the cars himself and created the role of Technical Director. He oversaw the processes of design, construction, racing and testing, bringing together all of the different disciplines. It was during the '80s that Head was credited with many revolutionary concepts, including a six-wheeler, which tested in '82, and continuously variable transmission, which replaced the car's conventional gearbox. However, neither of these systems made it onto the grid due to rule changes.

In 1986, following Frank Williams road car accident, Head was forced to assume control of the team. Under his temporary stewardship, the team secured the Constructors' titles in 1986 and both the Constructors' and Drivers' title in '87. In 1990 Williams hired engineer Adrian Newey. Both he and Head rapidly formed the outstanding design partnership of the decade with their cars achieving a level of dominance never previously seen, and not repeated until the Ferrari/Schumacher era a decade later. In the seven-year period between 1991 and '97, Williams took 59 race wins, five Constructors' titles and four Drivers' titles.

The company continued to expand over the following years and Head changed his role from Technical Director to Director of Engineering, until on 31 December 2011 he stepped down from the WGPH Board of Directors.

Speaking about the Award, Sir Frank Williams said; "My name may be above the door, but I have always stressed that the creation and subsequent success of Williams was very much a team effort. My co-founder Patrick Head was the design genius who turned us from a small upstart into a World Championship winning force. His engineering talent helped play a key role in establishing Great Britain as a leading force in global motorsport and the benefits of this are still being felt to this day, both culturally and economically. This Award is thoroughly deserved for his contribution to British engineering and motorsport."