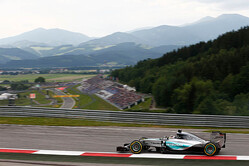 Nico topped the times in the opening session with Lewis P2. The afternoon saw Nico end the day second fastest, with Lewis P5. Less than a second separated the top 10 in the afternoon session. The morning programme focused on low and high fuel running on the prime tyre. Analysis of the option tyre on low fuel and both compounds on high fuel followed in the afternoon.

Nico Rosberg: In general it was a decent practice day for me. It´s a challenge to nail the setup for this track - but I felt comfortable in the car. The red cars are very strong here. They had very impressive pace - on higher fuel levels as well as low. They are our closest rivals, I think, but on this short track the lap times are quicker and all the cars are closer together. We will definitely need to work hard to find a few tenths for tomorrow.

Lewis Hamilton: It's been an ok start - not the best but not the worst either. I had a bit of oversteer here and there but generally the car feels great and we definitely made improvements from P1 to P2. There's just not a lot of grip out there on track and I didn't put a full lap together. I had some good sectors and was a few tenths up on a couple of laps, so the pace is there. I was pushing hard and learning with every lap. If you're not making mistakes you're not trying hard enough. With the tyres, the option was one step faster than the primes as usual - but other than that the difference between them wasn't spectacular in terms of feeling. I'm not sure how our pace looks relative to the others. I haven't seen the data but Ferrari looked quick and it's definitely closer here than at other circuits. We're always aware of the threat from our rivals and we take it seriously every race. Hopefully it'll all come together tomorrow.

Toto Wolff, Head of Mercedes-Benz Motorsport: We saw today the picture we had expected after Canada: the competition is close on this kind of circuit and we have a battle on our hands. On a circuit with the shortest lap time of the year, of course the gaps are smaller than elsewhere, and this makes it important to get every detail right. We saw today that it is tricky to string together a mistake-free lap, especially in the cool conditions with the tyres at the bottom of their working temperature range. But we ran reliably in both sessions and completed our programme, so we have lots to think about tonight. I think we can expect a close-fought weekend and a nice battle on this great circuit.

Paddy Lowe, Executive Director (Technical): Overall, a trouble-free start to the weekend. There was a threat of rain early in the day which never materialised, so we managed to complete our full programme. Lewis flat-spotted one of his tyres in P1 - but this was the only minor setback of the day and both drivers seem happy with the car. Performance between the teams looks very close on both low and high fuel, so it looks like being an interesting and entertaining weekend ahead.