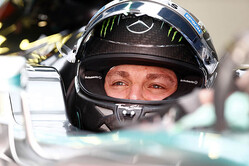 Mercedes is under investigation for an alleged rule breach involving Nico Rosberg's car in FP1.

The German was sidelined early on following a hydraulics issue which necessitated a change of gearbox.

The incident under investigation concerns the fact that on its return to the paddock the car was covered, a breach of article 27.4 of the Sporting Regulations.

"During P1 at 10:28 members of the Mercedes AMG Petronas F1 Team covered the underside, rear diffuser area and the front wing of car number 06 when it was brought back to the paddock after it having stopped on the circuit due to a mechanical problem," said Jo Bauer, the FIA's technical delegate, in a statement.

"As the car hasn’t suffered any kind of accident damage this in my opinion is a breach of Article 27.4 of the 2015 Formula One Sporting Regulations and I am referring this matter to the stewards for their consideration."

Article 27.4 states that: "During the entire event, no screen, cover or other obstruction which in any way obscures any part of a car will be allowed at any time in the paddock, garages, pit lane or grid, unless it is clear any such covers are needed solely for mechanical reasons, which could, for example, include protecting against fire."