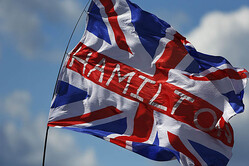 Ahead of today's opening session the air temperature is 18 degrees C, whilst the track temperature is 30 degrees. It is warm, bright and sunny... and, yes, it is Silverstone. England in summer.

Today sees the appearance of the much anticipated Force India B-spec car, whilst Manor has a slightly different livery having signed up another sponsor.

There are a number of reserve drivers on duty this morning, including Jolyon Palmer replacing Romain Grosjean at Lotus, Raffaele Marciello in for Marcus Ericsson at Sauber and Susie Wolff for Valtteri Bottas at Williams.

As ever, Mercedes will be the favourites here however, much is expected of Ferrari and the ever-improving Williams.

Tyre choices are hard and medium, following three races on softs and supersofts. Nonetheless, we are expecting yet another one-stop race.

The lights go green and Stevens is first out, followed by Nasr, Vettel and Palmer. In no time at all there are 15 cars on track.

Despite only having completed two laps, Ricciardo is told not to push his tyres as they are his second set.

Five minutes in and all but the Mercedes duo have been out.

Eight minutes in and Rosberg finally emerges from his garage. Moments later he is joined by teammate Hamilton.

Out come the yellows when Hamilton spins at T15 after dipping a wheel on to the Astroturf.

A 35.875 sees Rosberg go quickest, as Sainz goes third ahead of Massa, Verstappen and Wolff.

"Stop, stop, stop," Rosberg is told, the German having suffered a loss of hydraulic pressure. "Stop now, do not change gears," he is warned. He duly obliges. His session shouldn't be over though, there is plenty of time to get the car back to the pits.

As Kvyat goes third (36.699), Button's car is on the stands in the McLaren garage as the Briton chats with teammate Alonso.

Ricciardo goes third (36.362), as Rosberg arrives back in the paddock. Raikkonen currently fifth, ahead of Vettel, Hulkenberg and Sainz.

As Maldonado runs wide in the final corner out come the yellows again. "Lost the gear, check what happened," Maldonado tells his crew.

The floor is removed from Button's car which is understood to have sprung a leak. Elsewhere, Rosberg's car is back in the pitlane.

The opening half hour, whereby the drivers have a 'free' set of tyres, comes to an end. Hamilton is quickest, ahead of Raikkonen, Rosberg, Ricciardo, Vettel, Hulkenberg, Sainz, Verstappen, Kvyat and Massa.

There follows almost fifteen minutes of silence until Sainz and Verstappen break the silence.

Verstappen goes second with a 35.530 and teammate Sainz fourth (35.797), as the Toro Rosso duo take full advantage of the empty track.

As Nasr improves to eleventh (36.855), Perez remains around 0.6s off his teammate's pace. Nonetheless, an impressive debut for the B-spec Force India.

Progress at McLaren as Alonso finally emerges and the floor is refitted to Button's car. It appears Alonso hasn't been running thus far in an attempt to conserve mileage. And who can blame him?

As Hamilton heads out, teammate Rosberg studies a timing screen.

"Slow down and box," Raikkonen is told, "we have a problem". "Yes, I thought something was wrong," says the Finn.