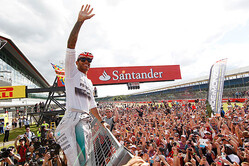 Over the Austrian Grand Prix weekend, Silverstone announced that a discount of 44% would be available for F1 fans wishing to attend next week's British Grand Prix. The number (44) being in honour of world champion Lewis Hamilton's race number.

The hefty discount is great news if you haven't yet bought your tickets but not so welcome if you bought them at the full price.

As ever, social media came into its own with fans taking to the circuit's Facebook page.

"Honestly don't know what to do for the best! Do we buy as soon as they are released as we do every year or do we wait and maybe get more for our money or lose out altogether! I feel like loyalty gets you nowhere at the British grand prix! What crack."

" I think you have lost lots of loyal fans over the fiasco of this years tickets. We, like many who have commented here have bought 3 days stand tickets early ( I bought 6 tickets - not cheap!) year after year. this year we have no discount and missed out on the pit walk draw too. We have come to Silverstone for several years but will be looking at a different European one for next time. We feel ripped off!"

"Stop with the corporate b*******, and give something somthing back to the loyal fans who booked straight after last years GP, and who were promised the best prices."

"And you think we'll rush to buy new tickets for next year early MD Patrick Allen? Not after this year's fiasco - I'm furious 7 of us have paid full price and not been offered anything in the way of recompense!!!!!! We're off to Monaco instead for 2016."

"A 'trial' that suddenly reduces prices by that much must have been the product of a very desperate meeting. You surely have to admit that it was not designed to benefit and reward the many thousands of us who buy our tickets early and have done so for years."

"Too late for our party. We will be boycotting Silverstone next year for the poor show with tickets, and booking elsewhere."

"I understand that not all of our customers are happy about the recent ticket promotions which have resulted in some of the remaining grandstand seats being sold at significantly lower prices than the prime seating offered just after the 2014 event. Everyone at Silverstone values our customers and I really appreciate the loyalty that has been shown to the circuit over the years.

"However it was important to address the trend of ever increasing ticket prices that was preventing the vast majority of loyal fans and their families from attending the event.

"In order to determine the best value for our customers it has been necessary to trial several price points across different ticket categories to arrive at a sensible ticket model for 2016.

"As we approach our 2015 event which will see a record crowd here at Silverstone our 2016 pricing is ready to be launched. The new model, resulting from our trial price points, will see tickets for the 2016 event at their lowest for many years. Additionally it is my intention to deploy an incremental pricing policy not dissimilar to the budget airline model (which I am sure everyone is familiar with) where the earlier you buy your ticket the better deal you get with the price increasing incrementally towards race day.

"I can assure fans that there will be no repeat of this year’s experiment and that immediately after the 2015 race will be the best time to buy the cheapest tickets for a limited period before subsequent price increases.

"All of that said I know there will be some fans out there that will understandably feel let down having bought their tickets early and in good faith that the ticket price they paid should have been the best value. Albeit you have secured the seat you wanted in the location of your choice.
"
We are going to put on the best show ever for all fans in what will be a record breaking event and hope that no matter what ticket price was paid it will be seen as great value for money. Next year everyone will have the opportunity for even greater value for money as we introduce our new pricing and ticketing strategy that promotes “the earlier you buy the more you save”.

"I look forward to seeing you all at Silverstone and joining me in cheering Lewis on to a home Grand Prix victory."

At a time fans are already turning away from the sport, this is not the best way to hold on to them.