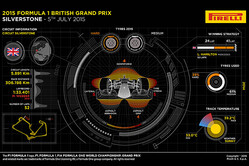 The P Zero Orange hard and P Zero White medium tyres have been selected for the British Grand Prix at Silverstone: a fast and flowing circuit that takes a lot out of the tyres, especially during the many high-speed corners. This results in plenty of wear and degradation, especially if ambient temperatures are high - which is expected to be the case this year. As well as being one of the quickest and most historic venues on the Formula One calendar, Silverstone is also something of a home race for Pirelli: the Italian firm's Formula One logistics hub and centre of engineering excellence is located in Didcot, less than an hour away by car.

Paul Hembery: "Silverstone is always a fantastic occasion, with an extremely knowledgeable and enthusiastic fan base of British spectators. It's one of the few circuits where the drivers say that they can actually hear the crowd as they are driving along. As was the case last year, we're bringing our two hardest tyres in the range, because Silverstone gives us the highest lateral energy loads of the season. These place heavy demands on both the tyre compound and structure. So we should be seeing between one and two pit stops at Silverstone, especially if the weather is warm, which is expected to be the case.

Having said that, warm weather has been the forecast for a number of years previously - and we've still often ended up with a dose of more traditional British weather instead! So the teams will have to be prepared for everything and think about how to get the maximum out of their tyres during the weekend as a whole, rather than just session-by-session. Silverstone is one of those circuits that really rewards absolute bravery and commitment, so we should be in for a great race."

Silverstone is well known for its succession of fast and sweeping corners, which load the tyres with sustained forces that peak at 5g. The teams use high levels of downforce, meaning that there are often big vertical as well as lateral forces acting on the tyres at the same time. The straights and braking areas are reasonably short, allowing the teams to run a lot of aero without too much time loss.

Silverstone's asphalt offers a high level of grip, further increasing the workload on the tyre. Tread temperatures can peak in excess of 110 degrees centigrade, visible on the thermal imaging cameras that have formed a popular element of Formula One broadcasting since being introduced in 2013.

Last year Silverstone provided a showcase for Pirelli's future technology when the Italian firm trialled 18-inch tyres fitted to a contemporary Formula One car for the first time, which completed some demonstration laps during the official post-race test on a Lotus driven by Charles Pic.

Last year's strategy and how the race was won: Lewis Hamilton won the 52-lap race for Mercedes, with a two-stop strategy. He started on the medium tyre, stopping for the hard compound on lap 24 and hard compound again on lap 41. The race was affected by an early red flag, which meant a re-start with drivers allowed to change tyres on the grid. This had a profound effect on strategy: seven drivers in the top 10 were able to stop just once.

Expected performance gap between the two compounds: 1.0 - 1.2 seconds per lap.