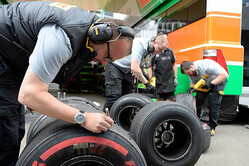 Pirelli was able to try out some new materials that could be incorporated within the 2016 Formula One tyre range at the final in-season test of the year, which took place at Spielberg after the Austrian Grand Prix. All the teams apart from Manor took part in the test, with a number of them running test and reserve drivers, including Formula One debutants such as Ferrari's Antonio Fuoco and Toro Rosso's Marco Wittmann.

The first day of the test was stopped by heavy rain on Tuesday morning, which led to a red flag that halted the morning's running. Only a couple of drivers carried out some tentative reconnaissance laps on the full wet tyre, before running resumed in the afternoon, starting on Intermediate tyres and then moving onto the normal supersoft, soft and medium. Testing then continued until 8pm in order to make up some of the time that had been lost.

The second day was completely dry, enabling the teams to test the supersoft, soft and medium slick tyres. In collaboration with Ferrari, Mercedes and Toro Rosso, Pirelli was also able to test some new materials that could be used within the 2016 Formula One tyre range. These were unmarked prototype front and rear tyres, with similar characteristics to the current range but slightly different materials within them.

Testing on the second day got underway with 13 degrees of ambient temperature and 18 degrees on track, under overcast skies. During the afternoon they peaked at 21 and 32° respectively. This meant that the softer compounds were more suited to the conditions. The fastest overall time of the test was set by Nico Rosberg for Mercedes on the second day of the test: 1m09.113s, using the P Zero supersoft tyre.

Each team is allocated a total of 110 sets of tyres for testing purposes throughout 2015; down from 135 sets last year. These can be used however they like, with the teams notifying Pirelli in advance of which compounds they would like to run in which test.

Paul Hembery: "It was a slightly frustrating beginning to the test in Austria, with rain wiping out the opening morning. However, some solid work was carried out from Tuesday afternoon onwards, with even some occasional glimpses of sunshine on Wednesday. Many thanks to Ferrari, Mercedes and Toro Rosso, which volunteered to help us test some new materials for the 2016 season, now that there are no longer any official in-season dedicated tyre test days. The results we obtained will be very useful as we continue the development of our next generation of tyres."