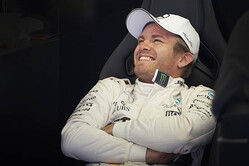 Daniel Ricciardo caused the only red flag of the session, the Australian stopping at the end of the pitlane around an hour before the day's running was due to conclude.

Among the first out on track this morning, Rosberg completed 34 laps before a gearbox failure curtailed his running just before 11:00. The team performed a gearbox change in time for last weekend's GP winner to return to action at 13:30 - 30mins after the end of the lunch break - completing a further 83 laps before the chequered flag at 18:00. Today's programme focused on aero and setup evaluation, in addition to a tyre test.

"Monday and Tuesday were two long days waiting for better weather," said the German, "so today was important as there are only four test days during the season. Luckily, the track was consistent and we could try a lot of different things. We had a gearbox issue just before lunch but luckily it didn't really cost us any time as we could work on it during the break and the guys did a great job to get me back out there so quick, so thank you to them for that.

"It was an intense programme but we got through everything and learned a lot. We started with was some aero work then spent time looking at tyres and a few mechanical things like spring settings. We also ran a stiff setup in preparation for Silverstone, which will be useful for next week. The car felt good with that so I'm sure we will be strong at the next race. It's a very fast track and you have to drive it very hard. But that sort of content - high-speed corners needing good downforce - is a specialty of this car, so I'm feeling confident."

At Ferrari, Esteban Gutierrez completed 110 laps on his way to posting the second best time of the day, albeit 0.818s off Rosberg's best lap.

"Today's testing focused mainly on studying the behaviour of the various Pirelli compounds, as well as looking at some aerodynamic solutions," said the Mexican. "It's always nice to be able to drive the current Formula 1 car and I want to thank the team for giving me this opportunity. It was a positive day, we did a good job and we completed the programme we had set ourselves, gathering plenty of data that we can now carefully analyse back in Maranello".

Valtteri Bottas brushed aside (continued) speculation linking him with fellow-Finn Kimi Raikkonen's seat at Ferrari as he concentrated on aero and chassis work. Over the course of the two days the team has run a number of components, some of them not allowed at race weekends, including winglets ahead of the rear wheels, as it endeavours to learn more about the behaviour of the car. Today was no exception.

"It was a good day overall and luckily the weather was kinder to us," said the Finn. "The work Susie did yesterday was really important as we continued our programme. We focused on aero and mechanical work, and now have a clearer idea where we need to push in terms of development. I now have to switch my focus to Silverstone, which I am really looking forward to."

"We completed our scheduled programme including a number of additional items on top, which is really positive," added the Grove outfit's chief test and support engineer, Rod Nelson. "We have had an excellent day today to complete the two-day test, we have a lot of data to go through now and have a clear direction in terms of development. It was great to have Susie back in the car yesterday, and Valtteri has built on that progress today."

2014 DTM champion Marco Wittmann was on duty for Tor Rosso, the BMW man making a convincing F1 debut by completing 158 laps on his way to posting the fourth best time of the day.

"This has been an amazing experience for me," said the German. "I was surprised at the power of the car; if I compare it to DTM, it's got quite a lot more power! I enjoyed the whole day, which was trouble free, so I was able to do a lot of laps. I'm happy with my day, I hope the team is too. I would like to thank Red Bull, Scuderia Toro Rosso and BMW for giving me this great opportunity."

"We've had a very productive day," said Phil Charles, the Faenza outfit's chief race engineer, "completing a high number of laps, with Marco making no mistakes and impressing us all with his approach and feedback.

"There was a short time of adjustment as he got used to the difference in braking from the DTM car to a Formula 1 machine. He then settled into a rhythm, as we started off our programme with a series of long runs. After that, it was time to proceed with the items on our test agenda; aero, tyre and set-up work, with some performance runs in the middle of the day, mainly for the driver's benefit."

Having driven the Force India yesterday, today Pascal Wehrlein was in action for Force India. The German completed 132 laps on his way to posting a best time (1:10.253) 0.7s quicker than yesterday, albeit under different track conditions and temperatures.

"I enjoyed today, it was great to do so many laps," he said. "The programme included evaluation of aero parts and hopefully this has given the team some useful data. It was also valuable for me to spend so much time in the car getting used to all the procedures in the cockpit - things like launch procedures and warming the tyres. It was nice to be back in a Formula One car and to work with this team again."

"It's been another solid day of testing with Pascal getting 132 laps under his belt," added chief race engineer, Tom McCullough. "The last time Pascal drove for us was in Barcelona during the winter (in the VJM07) so this was his first experience in the VJM08. He got up-to-speed very quickly and provided excellent feedback as we worked through a very busy programme, which included further data collection and correlation for our development parts.

"Having missed some dry track time yesterday, we set out to achieve an ambitious test plan and managed to tick off the majority of the items. It means we leave Austria with plenty of rich data to analyse ahead of our home race at Silverstone."