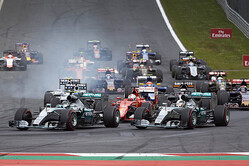 Whilst the current FIA president, Jean Todt, believes that much of the current criticism of F1 is misplaced and exaggerated, the raft of changes announced by the sport's governing body today, some to be implemented in the coming weeks, belies his confidence in the direction in which the sport is currently heading.

Meanwhile, at almost the same time the changes were being revealed, former FIA president Max Mosley, he who recommended Todt as his successor, took to the Daily Telegraph to voice his fears.

"There are no two ways about it," he writes, "if Formula One continues on its current path, it is headed for a major crisis.

"The futures of six out of 10 teams on the grid are uncertain, there is too much artificiality in the racing, costs are far too high, and all that is giving us uncompetitive - and at times - boring racing.

"Once spectators stop coming, the Grands Prix are no longer viable for the organiser," he warns. "If television audiences go down, Bernie Ecclestone has to trim down the contracts. From then on it becomes a downward spiral. And for CVC Capital Partners, the majority shareholders, it becomes especially difficult when they are trying to offload the sport.

"There have been all these stop-gap ideas, such as running three cars, but in my view that would be very bad for Formula One. They need to solve the problem of the competitiveness of the smaller teams within the money available. My proposal would be to allow teams who adhere to a cost cap - say £60 million a season - much more technical freedom. Overnight it would make the grid more competitive and more interesting for the public."

Of course, this was his plan whilst still in charge of the sport, indeed it was the basis on which three new teams entered F1, only one of them still in existence, albeit following a couple of changes in name, management and ownership.

"Formula One needs a drastic rethink in how it makes the rules. The current Strategy Group is utterly hopeless," he admits, a feeling shared by many.

"Even if Bernie and Jean could agree it would be difficult. But as it is, I think Jean feels that the teams should get on with it as grown-ups with Bernie. He’s far more interested in road safety, which I completely support (I was the same way except I did not leave Formula One alone as I saw it as a political tool in road safety).

"The best suggestion I have heard was to scrap the Strategy Group and replace it with three independent advisors; people who know the sport well but are not partisan. Ross Brawn, Charlie Whiting and Peter Wright seem like perfect three candidates.

"When I was president, by some means or another we would push what we wanted through, usually by asking for more than I actually wanted. I don’t know if Jean is unable to do that, but I don’t think he wants to. He believes F1 should get on and run itself, and there is an argument for that.

"The reason I used to interfere is because I thought it was very important for the FIA generally," he admits. "It opened so many doors and gave us clout with politicians when it came to the road safety agenda.

"Formula One remains an astonishing sport with a huge global reach and appeal," he concludes. "But its problems need to be addressed quickly so it is not allowed to drift any longer."