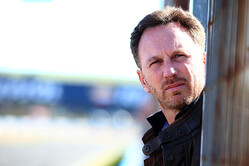 Christian Horner has urged F1's Strategy Group to think for the good of the sport's future when it meets on Wednesday.

The controversial group, which consists of the six leading teams, the FIA and Bernie Ecclestone meets at a time of falling TV viewers, empty seats in grandstands and leading figures within the sport publicly talking it down.

However, some see the group as irrelevant, believing that, as ever, the teams want only what is best for them as opposed to the greater good of the sport.

Speaking at a media event ahead of the British Grand Prix - which precedes a three-week break following German's absence from the calendar - Horner has called on the members of the group to (ahem) put self-interest aside.

"It's a crucial meeting," he told reporters. "Really, some actions needs to come out of it. The time for talking has now come and gone. There needs to be some definitive actions following the meeting, which hopefully will be achieved."

"What we need to do is all get on to the same page," he insisted. "It's a key element. I think rather than trying to achieve consensus, the structure of the group is that the majority carries. The FIA and commercial rights holder need to close in on a position. That's them more than the teams. A team has different interests to the promoter and there's an awful lot of self-interest.

"It's time to take some action now," he warned. "We've talked a lot, and now we need to dictate a strategic direction for the sport. That's what we need to focus on and achieve out of tomorrow's meeting."

Nonetheless, even if those attending do manage to find themselves on the same page, any decisions must then go before the F1 Commission and then the World Motor Sport Council. Indeed, Horner recently recommended adding another layer of ‘input' when he suggested the sport recruit Ross Brawn as an adviser.

Fact is, Red Bull pays his wages and therefore Horner will go into any meeting seeking what is best for Red Bull, which, as we know from the team's current predicament, will put it at odds with Mercedes and, in turn, its customer teams.