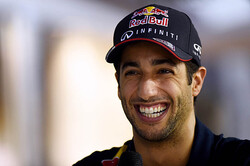 OK Daniel, admit it, you have a little bit of man-love for Silverstone...
Daniel Ricciardo: I can't hide it! Silverstone's awesome. I love high-speed circuits with high-speed corners - and so the run from Copse through Maggotts, Becketts, Chapel and then around Stowe... maybe the five coolest corners on the calendar and to have them coming at you one after the other. Yeah, I love it.

You made your F1 race debut here for HRT. We know you've done plenty of racing here before that - but was practice ahead of the 2011 British Grand Prix your first Silverstone lap in an F1 car?
DR: It was. So at the time it was probably the quickest I'd ever been around the circuit because the HRT was just about faster than the old-spec FR3.5 car. It's definitely a circuit where, the faster the car, the better the experience - though that's usually the case with highspeed tracks. I mean, Silverstone's great in a Formula Renault 2.0. In an F1 car? Epic.

We have been known to have the odd spot of rain in the past. What's it like in the wet?
DR: The thing about Silverstone is that it's packed from Thursday onwards. If we have one of those nice, hot blue-sky sunny weekends then the atmosphere's amazing. If it's grey, wet and windy then the atmosphere's still amazing. I'm not sure how that's possible - but Silverstone manages it. As for driving in those conditions, it's still exciting - but in a very different way!

Obviously you lived just down the road for a while. Where's your favourite hang-out?
DR: Yeah, I lived about 20 minutes away for a few years. I know racing drivers are supposed to live on lettuce and carrots but I'm quite partial to steak. Check out the Purple Goose in Woburn Sands. Really good. Scott the chef knows his business. Say I sent you.

Finally, with no German Grand Prix, there's a mini-break after Silverstone. What's in store for you - just more time in the gym?
DR: No chance. Vegas, Baby! 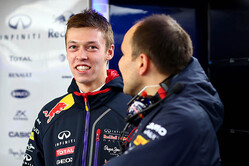 We're coming from the first of the team's home races - Austria - to the second, here at Silverstone. Are you looking forward to it?
Daniil Kvyat: It's the first time for me racing for the team at its home grand prix in the UK and I'm definitely looking forward to it. It's a chance for everyone from the factory to stay really close to the race team at a grand prix and that should give it a great atmosphere. It's good for the team I think.

And for you? Is the track good for you?
DK: Silverstone is a real classic. It's a cool circuit: high speeds, incredibly challenging layout, I really enjoy it. If you get everything right with the car and your confidence is high then it brings you a lot of joy. The high-speed corners are what it's all about. That's where you really feel like you are driving a Formula One car, really pushing hard.

What's the section that best embodies that feeling?
DK: Maggots-Becketts and Copse. It starts with Copse and ends with Maggots-Becketts. That whole section is all done in one breath, the speed is really good and you really find your limits there.

You're not completely unfamiliar with the team's home base though are you?
DK: No. I used to live in Milton Keynes for two years, so I know the area really well, so for me it's an easy race to manage.

What was a typical evening like for you when you were living in MK?
DK: Well, when I was there I liked to cook for myself. I learned a lot about cooking! In terms of going out there are plenty of good restaurants in the centre and maybe there was a little bit of hanging out in the bars, until 11pm, and then home to bed. Living here was a really good experience, although maybe a bit different to living in Rome though!