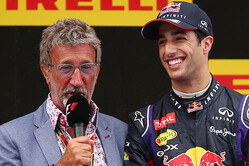 In the wake of comments made by team boss turned TV pundit Eddie Jordan, when the Irishman, in reference to McLaren's ongoing woes, pointed the finger of blame squarely at Ron Dennis, accusing the Briton of being "arrogant", the Woking man was quick to respond.

"I consider Formula One a bit of a family and families live in villages," Dennis told Sky Sports F1. "Villages always have a village idiot and he fits the bill perfectly.

"I don't consider him not a friend," he added, "I just think he's a little bit disconnected with reality. He wants to be colourful but colourful at other people's expense."

Asked his thoughts on the spat, former FIA president Max Mosley, who has had run-ins with both, was only too happy to oblige.

"Eddie could probably say the same thing about Ron," laughed Mosley, on Sky's F1 Midweek Report, "sometimes he too is a bit disconnected from reality and every family does have a sad case. But apart from that, I think both of them are, in a way, are justified.

"I like seeing comments like that from both sides," he added with a grin, "because it livens up the discussion."

Cartoonist Gurmit also enjoys such silliness, though it's clear to see which of the pair he sides with.