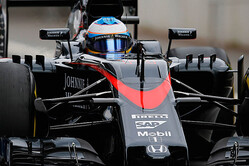 As expected, given Silverstone's high-speed corners and long straights, this was a difficult qualifying session for the team.

Both drivers were eliminated in Q1 - Fernando qualifying 17th, and Jenson 18th. Their fastest times were set on the Option tyre - however, Jenson admitted that his car felt better balanced on the Prime, which will be raced tomorrow.

Fernando Alonso: "I had a problem at the end of FP3 this morning. There was no clear resolution to the problem, but we found a suitable solution, and everything started working after we reset it.

"That meant I went into qualifying having done very few laps. I didn't start the session knowing enough about either the set-up or the conditions, but, given those limitations, I think we got the best from the car. I don't think I could've gone much quicker than that today.

"We knew this race would be tough for us - as will fast circuits like Spa and Monza - but we all appreciate that this is a long-term project, and we're definitely building for the future."

"I've been struggling with the balance a little bit - hopefully we'll learn a lot tomorrow, that's all we can do, really.

"Unfortunately, this is our situation right now - and it's not easy for a team of this stature and experience. There's always an amazing atmosphere at Silverstone - and today is no exception - but this hurts in front of my home crowd. Hopefully tomorrow will be a better day."

Eric Boullier, Racing director: "For McLaren to qualify 17th and 18th for the British Grand Prix, our home race, is very hard to take, I'll readily admit that.

"Our British fans are among the most knowledgeable, enthusiastic and loyal in the world, and, frankly, they deserve better than this. Success will come, in time, and they'll have reason to cheer in the future, but not this weekend clearly. For that I have to apologise.

"Having said all that, we know what we have to do to get where we need to get, and we'll continue to fight the good fight. As I say, we'll get there, mark my words.

"In Fernando and Jenson, moreover, we have two truly indefatigable champions, whose efforts in prolonged adversity have been and remain an inspiration to all of us. Chapeau!

"Equally, everyone at both Woking and Sakura is working as hard as is humanly possible to turn things around; when their efforts are finally rewarded by victory, as they surely will be, it will be their refusal to be browbeaten in these dark days that will have been the key to the team's eventual renaissance.

"In particular, here, today, I want to pay tribute to the brilliantly rapid and efficient work done by Fernando's mechanics, in readying his car for qualifying following his problem in FP3.

"Looking forward to the race, it would be foolhardy if I were to predict a points-scoring performance tomorrow, but the weather is notoriously fickle here at Silverstone, so anything is theoretically possible. So, come rain or shine, you may be well sure that we'll be giving it everything we've got, our endeavours spearheaded as ever and as always by our two great standard-bearers, Fernando and Jenson."

Yassuhisa Arai, Honda R&D senior managing officer - chief officer of motorsport: "First of all, I must praise the tremendous teamwork displayed in the garage today to get Fernando's car out for qualifying.

"The result of losing both cars in Q1 was disappointing, but we know that the power unit set-up was working in the right direction. However, as I said yesterday, we need to have the perfect combination of chassis and power unit to gain further positions in qualifying.

"The team has implemented aero updates very recently, and, with such a fast-cornered circuit like Silverstone, we'll still need to further mature the overall package, which was reflected in the result.

"For tomorrow's race, we'll maintain and manage the power unit race pace, and hope to have a stronger result."