No further action on Alonso/Raikkonen clash 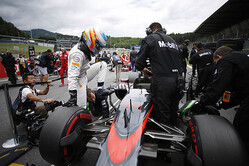 Stewards in Austria have deemed that no further action is warranted following first lap crash.

Having spoken to both drivers and studied video evidence, stewards at the Red Bull Ring have deemed that no further action is necessary following yesterday's first lap crash involving Fernando Alonso and Kimi Raikkonen.

The Finn, who qualified 18th but started 14th once the numerous penalties had been meted out, initially appeared to have been hit from behind by the Spaniard who - being the recipient of some of those penalties - started from 19th.

Alonso made a strong start and whilst it was originally suggested that he ran into the back of the Ferrari causing the incident, it soon became clear that in fact Raikkonen lost control of his car and veered across the track collecting the hapless Spaniard.

"I don't know exactly what happened before the crash," said the Finn, "I had some wheel-spin in an unusual place. I was at a quite high speed, suddenly went left and end up there. I did not see anything coming, everything happened very quickly."

"Kimi ahead of me had started on the prime tyre, and he exited turn two with a lot of wheel-spin," said Alonso. "I went to overtake him and he lost the car to the left, and that's exactly where I was - so we both went into the wall.

"Luckily, we're both fine. It was a strange incident, because he lost the car in fifth gear, so it must have been very low grip."

The incident brought a miserable weekend to a close for the Spaniard, who, like his teammate, had been hit with a 25-place grid penalty.

Whilst the stewards deemed that "no driver was at fault" and consequently "no further action is warranted", there is concern that the incident will impact McLaren's plans for this week's second in-season test.

A number of updates had been provided for Alonso's car only including a revised nose and front and rear wings, all were damaged in the incident. It's feared that replacements, which were not available for teammate Jenson Button at the weekend, might not be ready for the test which begins tomorrow.