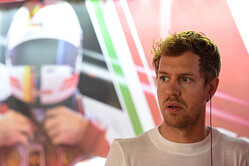 Kimi Raikkonen: "I don't know exactly what happened before the crash, I had some wheelspin in an unusual place. I was at a quite high speed, suddenly went left and end up there. I did not see anything coming, everything happened very quickly. Unfortunately at that time my race was over, it has been a poor weekend, now we have to think about next one."

Sebastian Vettel: "The issue during the pit-stop is something that can happen: I had a problem, but generally the guys are the quickest on the pit lane so there's nobody to blame. We are a team and when you push to the limit these things can occur. I would have preferred to get the trophy for third place of course, but we'll come back next year with the same objective. The car was very good, I think we made another step ahead and we had a great pace. This is a very short lap so there's not so much to create, but in the next races there are more high speed corners and we can better show that we're a bit closer even if today's result doesn't show so well. In the last part of the race I've tried to stay close to Felipe, but he was very quick on the straights. Today was a bit disappointing because we've lost the podium, but I'm sure tomorrow it will be better and we'll focus on the next race: the team in Maranello is very committed to this and they're all working hard."

Maurizio Arrivabene: "Which positives can we take from this weekend? Not many, but certainly once more we are aware that Sebastian was the big asset we could get this year, together with a team which is fully committed and now is said to be the second force in the championship. But I'd like us to be the first, and that means we have to commit ourselves beyond what's possible. We must use whatever we have available and try to get as close as we can to our main competitors, taking advantage of their mistakes. Also, as per the time we lost during Seb's unfortunate pit stop, we must work with humbleness: because, even if everything had gone well, that wouldn't have been enough to beat both Mercedes on track. But this only prods us to never give up."