Raikkonen hits out at media bull**** 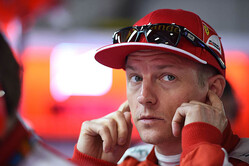 All was going well at Kimi Raikkonen's pre-Austrian GP weekend press conference, the Finn dealing with the questions in his own inimitable way, admitting that whilst Ferrari has made progress so has its rivals.

But when asked about reports in the Italian media that he was willing to accept a pay cut in order to keep his seat at Ferrari for another year, his mood changed, the normally unflappable, laconic Finn going on the attack.

"I heard something about that," he snapped. "I would be interested to know who wrote it, because first of all none of you have any idea what my contract says and you never have.

"It's bull**** nonsense that you guys come up with all the time," he continued, "so keep writing that and it's fine for me. The point is you have no idea what the contract says. I have a contract, they have to sign it. It's as simple as that."

It was at this point that the author of said piece made himself known, at which point Raikkonen's eyes narrowed.

"It's you?" demanded the Finn. "Have you seen my contract?"

When the journalist admitted they hadn't, the Finn responded: "So you just come up with bull****, yes or no? You don't know the contract but you write stuff. You write stuff that is not true. Maybe you should start writing some stuff that makes sense.

"If I'm not with Ferrari, I'm not with any team, it's as simple as that," said Raikkonen, having taken a deep breath. "You guys worry about it more than me. I always said it's not the end of my life if I don't race next year, but obviously I want to be here and I feel that the team is definitely going in the right direction and doing the right things. I'm sure in the future it will be the team to be in, but we have to still work out a few things."