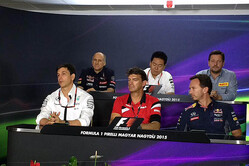 Clearly a difficult weekend for Formula One as a whole, with the loss of Jules Bianchi, so directing the question to Graeme - as the man most closely associated with him - how have the team members dealt with the weekend so far?

Graeme Lowdon: Well it's been, as you say, a very difficult week. To be honest, it's been a very difficult nine months and this weekend, I won't lie, it has been more difficult than I thought, actually. But I have to say it has been made a lot easier by the F1 family. As you know Jules was universally liked in the paddock and the support of everybody to the team has been fantastic. I think the reason why everyone has found it so difficult is the sense of loss and looking around the cathedral on Tuesday there were just so many people there and they had all lost something in some way, whether it was a colleague, if it's a mechanic they've lost their driver, even in the media you've lost a person that you knew and that you interviewed, people had lost team-mates that they raced against. If you look at the teams - ART, Manor, Force India, Ferrari had lost a team member and it was just this overwhelming sense of loss really and I think what was very clear was that nobody had lost more than the Bianchi family. I have to say I drew enormous strength from Jules' family. For everyone that knows them, they are an incredibly close and loving family and Philippe and Christine have had to endure something that I can't really comprehend over the last nine months and my heart really does go out to them. I have to say that in everything we have done with the family, the warmth and compassion, just everything that they have done has been incredibly respectful and loving and it's been enormously helpful and I'm sure not just to me, we don't have a monopoly on feeling sad about what's happened. It's touched an awful lot of people and I think Jules' family have really carried themselves in an incredible way, really incredible, in a situation that I couldn't really comprehend. I think the danger, as ever, is that you focus on what you've lost and not what's been gained by knowing Jules over what's been an incredible time. And I know a lot of you have talked to drivers and have had their personal experiences of Jules as a person and he was somebody who in my view added so much to so many people's lives. I know he did with me. One of the things that struck me about Jules was the very first day he came into our garage in Formula One for a seat fit, in Barcelona. He came in as a Ferrari development driver and that already is a sign of all the hard work and skill he had put in and yet he came in with an eagerness in eyes - he could not wait to get into that Formula One car. And yet he displayed an emotion or a trait that you don't often see these days, sadly, and that was that he was incredibly grateful. He was grateful that he had the chance to be in Formula One and I think that reflected the fact that he was very, very good. He knew he was going to be good at driving the car and that to me was one of the defining points. But somebody did ask 'of your time with Jules, what do you remember the most' and I can honestly say, from my point of view, what I remember the most is that from the minute he walked into that garage to the minute we said goodbye it was an absolute pleasure to work with him and I dearly miss him now that he's not here.

Thank you. So looking ahead, from the team's point of view, how have your plans evolved about this year and the next year - the chassis etc - where are you at at the moment?
GL: I was just saying to Christian on the way in: if the optimum way to run a Formula One team is to do it the way we've done it in the last seven months, everyone would be doing it and quite clearly they're not. We've had the strangest set of challenges that you can imagine, but I think what underlies everything is that we have got respect for this championship. We were ninth in the Formula One World Constructors' Championship last year, in no small part due to Jules' drive in Monaco, so we have a rightful place to be here but we have not had the benefit of being able to plan how we would correctly like to plan for the 2015 season. We think we're making the optimum decisions going forward. We haven't gone quite as well here today as we thought, but that's just looking at just short-term tactics. I think we're getting more established now, the team's getting more up to strength in terms of personnel, we're getting the premises, the new factory sorted out, so everything's moving in the right direction and I think once everyone draws breath after having a rest during the summer break, we'll push as hard as we can in the second half of this season but really have our eyes fixed on 2016.

OK, thank your for that. Paul, coming to you, another hot weekend, clearly. What did we learn from the way that the soft and medium tyres performed in the free practice sessions. Any thoughts on likely strategy for Sunday's grand prix?
Paul Hembery: Well, there was a couple of seconds of difference between the two compounds, slightly higher than what we had anticipated. Very little graining on the front left, which sometimes you have here when you're doing your first Friday runs. With that in mind we're probably looking at a two-stop race. It depends really on the data from the longer runs, which were slightly interrupted for most teams this afternoon. But with hot weather foreseen for Sunday we envisage, as I said, a two-stop race.

What progress are you making on finding ways to give the teams more variety in the choice of compounds next year?
PH: Yeah, we're having some pretty good ongoing discussions with the teams and the FIA and we seem to be homing in on a solution that gives the variety of choice they'd like to have and gives us an element of security that strange decisions aren't made, so we're hopeful that in the next few weeks we'll be able to convey that to everybody, so that we can start working towards next year.

Thank you. Christian, coming to you, obviously the headline is the blow-up, but beneath that some very positive signs from free practice two in particular, both on the single qualifying lap simulation and on the long runs as well. Where in the field do you think you'll be competing?
Christian Horner: That's a very good question. Fridays are somewhat masked by fuel loads and engine modes and so on, so it's difficult to get a truly clear picture but our expectation coming into the weekend was that this would be a circuit that would hopefully present an opportunity for us and both drivers have been pretty happy with the car on short and long runs, so, yeah, so long as it all holds together then hopefully we should be in a reasonable position to hopefully challenge Williams and Ferrari ahead. I think obviously Mercedes are in a class of their own at the moment but hopefully those two teams ahead of us we should be able to take the challenge to.

You've been waiting for Renault power unit updates and that's now imminent now, I believe, at the next grand prix. What's the expected step from that and what's the plan for the rest of the season?
CH: I don't think there is anything scheduled now before Sochi. That probably is the earliest that we are going to see any form of development or use of the tokens, so the engines we've got at the moment are what we're having to live with for the time being. So engines four and five of what the drivers have been using between Friday and Sunday racing, unfortunately Ricciardo has now lost engine four, so he's only got engine five, that came into service for the first time in Austria, to get him through the next few races, so only time will tell as to whether we can get to Sochi or not without incurring another penalty before introducing an upgraded unit.

Thanks for that. Franz, coming to you, you've obviously built a strong team now, strong infrastructure at Toro Rosso. How do you keep key personnel together when the big teams come calling?
Franz Tost: I don't let them go! No, the value of a team is always the quality of the employees and over the last three to five years we really pushed very hard to recruit high-quality people and James Key, our technical director, was the key person to do this and he surrounded himself with very, very good, high-skilled, capable people and of course all these top engineers have long-term fixed contracts and apart from this, at Toro Rosso, the infrastructure is getting better. Our new building will be finished at the end of this month. That means the working environment is also quite good, because all the engineers are under one roof and we expect better communication, better co-operation and at the end even better performance. Apart from this, Toro Rosso I'm convinced has a good future. We are on the financial side also quite healthy and I expect also some success in the future and therefore I don't see any reason why one of the top people should leave the team, especially after the hard period to build up everything, then of course the people want to see the results and want to be involved when hopefully we will have some success.