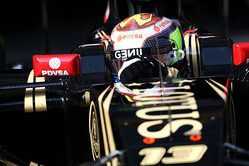 Lotus drivers Pastor Maldonado and Jolyon Palmer enjoyed minimal running in today's opening session at the Hungaroring as the Enstone outfit found itself without tyres.

In the wake of reports of the team's financial problems, court documents revealing that it has 27 "unsatisfied judgments" worth £561,408, Pirelli finally lost patience and demanded the latest instalment be paid before it would release its tyres.

With talks ongoing since yesterday, deputy team principal Federico Gastaldi blamed the banking system - not the media - the situation finally resolved less than an hour before this morning's practice session was scheduled to begin.

However, that wasn't the end of the problem for though the team now had the requisite rubber on which to run it needed to be brought up to temperature.

Both drivers - Palmer replacing Romain Grosjean in this session - completed one lap during the 'free tyre' phase (no pun intended) and while Maldonado was able to complete further laps later in the session, the Briton was left side-lined and frustrated.

Earlier this week, gearbox components manufacturer Xtrac, which was behind a recent winding-up petition, reached an out of court settlement with the team, which is said to be under consideration by Renault as it ponders its F1 future.