Marussia assets up for auction 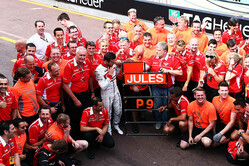 As Administrators for Caterham continue to seek a buyer for the team, the assets of rivals Marussia have been put up for auction.

The Banbury outfit which entered the sport (as Virgin) in 2010 lured, along with Caterham and Hispania, by the promise of a budget cap which would level the playing field, ceased trading at the beginning of the month, making 200 employees redundant.

Still reeling from the horrific accident in Japan that left Jules Bianchi fighting for his life, Marussia managed one more race (Russia), albeit with just one driver, Max Chilton, on duty, before finally going under.

Though, like Caterham, there had been glimmers of hope, the team and its assets are now up for auction as another F1 dream appears to have ended.

Ironically, 2014 saw the team score its first ever world championship points - courtesy of Bianchi at Monaco - which saw it finish ninth in the constructors' standings, ahead of veterans Sauber and Caterham.