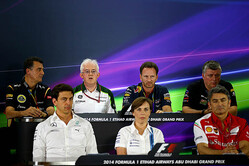 Toto, we have to start with you. Obviously the showdown this weekend between your two drivers Lewis Hamilton and Nico Rosberg; how tense is the atmosphere in the garage this weekend and how do you feel about today's performance?
Toto Wolff: Hi everybody. The tension is on I would say, and it is pretty normal. It has come to the last race now, it's between the two of them, it's the all-defining, decision-making race and it's pretty normal. I wouldn't say that there is more tension than expected in the garage. There is a good spirit. Today was a good day. It might sound a bit boring but we did our programme, lots of running. We did the long runs we expe3cted so all OK for Friday.

Now I don't know if you know this but the last time that one engine maker managed to take every pole position during a season was back in 1969. How does it feel to be on the verge of that particular record?
TW: I wasn't so much into statistics before this season but breaking these kind of records is a great achievement for the team and makes me really proud. I remember when I was a child the McLaren records, these orange and white cars would dominate everything and now us being in such a position and having equalled those records and beaten some of the records is very satisfying indeed.

Thank you for that, Finbarr, coming to you. At the other end of the grid, obviously your team is also in the spotlight this weekend. Can you give us an idea of the logistics of getting the team here this weekend?
Finbarr O'Connell: Yes, it's been absolutely crazy. I think about two-and-a-half weeks ago I met all the employees of the Caterham company. They weren't my employees at the time, I wasn't even appointed to 1MRT at that stage. And we just spoke about the position they were in and how they hadn't heard anything from 1MRT. We moved from that to a couple of days later thinking if we could get here and actually showcase the team, show the world it was still there and needed new ownership that I would have a much better chance of getting someone in to buy it, to thinking up the idea of going for the crowd funding - we got 6,500 fans and supporters who have put money in there and huge support from the all of the people we work with, and that's basically Red Bull and Renault, Pirelli, Dell and Total as well. With their support we've raised the money, raised the support, amazing. We've signed a new English driver, which is extremely exciting as well. We're there today. Our purpose here to show people we are here. We're not a blank canvas, but we are an operational team that somebody can effectively buy an F1 team off the shelf and become part of the most amazing club in the world I would say.

The other half of that question is, how optimistic are you that you will find a buyer? Have you got any interested buyers that you think might come through?
FO'C: Yeah, I've got a number of people who could acquire. It's just persuading people to make that decision. It's a huge acquisition decision because of everything... everybody knows what you have to do, those budgets you have to meet etc etc. But we have people who could do it and with the achievements we've had up until now I really hope and believe we're going to get there.

Thank you very much. Claire, coming to you. A slightly tricky start to free practice one for the Williams team. Do you think you have the pace though to get involved at the front?
Claire Williams: We have to; we don't have a choice. We're here to secure P3 in the championship and with the double points that's going to be even harder for us. We do always tend to have, not a difficult Friday, certainly not as strange as the one we had today but we've resolved the problem. So we're looking forward to going into qualifying tomorrow. We've just got to do the job on Sunday and that's all that we're focused on.

You've had the second-fastest car very often this season. Do you think it should have been quick enough to have finished second in the championship rather than third and what have you got in the pipeline to try to move things forward for next year?
CW: I think Red Bull have done a great job, as you would expect them to do. We didn't start really scoring the points or the podiums that we needed to in order to take that challenge to them until much later on in the season. To make that transition, to make that jump that we've done this year, from where we were last year in P9 and then to take that up to P3, I think the team can be really proud of the job we've done. And, you know, moving forward it's just about making sure that we can sustain that position and to be closing the gap to Mercedes next year and to Red Bull and to hopefully taking the challenge to them.

OK, thank you. Marco, obviously this weekend you have announced the departure of Fernando Alonso and the arrival of Sebastian Vettel. Can you say a few words about both situations and why you feel that Vettel is the right man for you going forward?
Marco Mattiacci: First, we need to thank Fernando for all he has done for us, what we have done together over the last five years. But at the same time it is clear to everybody that we want both to open new cycles but it was important to do it with the utmost motivation and commitment. With Sebastian we get one of the youngest world champions ever, four championships. I met him personally in the last few months. He is an extremely hard-working guy, humble, disciplined. I'm sure he will bring the phenomenal experience that he went through Red Bull and the enthusiasm needed to go through certain difficult moments that are waiting for us, but again sharing the overall project that I think is to go back to the top.

It's been quite a year for you. Twelve months ago you were in America thinking a 2014...
MM: Seven months ago I was in America!

Exactly! You were then thinking about selling road cars and now you find yourself here at the end of your first part season as a team principal. What have you learned from this whirlwind year?
TW: He hopes to wake up from this nightmare!

MM: (Laughs) No, the intensity, the complexity but also the incredible amount of talented people that are in Formula One. How amazing is this sport, that is a global platform, the visibility that specifically in my case I don't like for myself, but which is a consequence of the job. But it's definitely the pinnacle of motor sport. The level of competition, aggression is really high, so a lot to learn, but at the same time I think I brought understanding of people, choosing the right people and from here how to create an organisation for the future.