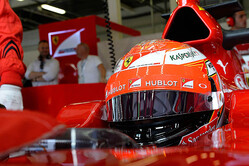 Fernando Alonso: "It was a real shame losing the opportunity to take part in the second free practice session here at Yas Marina, as it's the only chance to get an idea of how things will really go this weekend. On my second lap, the car just stopped unexpectedly and even though the marshals did their best to push the car back to the pits in time to get it back out on track, the work took the mechanics longer than expected. In the first session, we managed to complete our programme and the car behaved as expected, but the temperature, much hotter than it will be in qualifying and the race, means the data we acquired is not that relevant. For the same reason, tomorrow's third session won't be that useful and that means the first lap to match conditions in qualifying and the race, in the dark in the afternoon, will be the first lap in Q1. We definitely won't be that well prepared but all the same, we will try our best as usual."

Kimi Raikkonen: "It was a very busy day and, particularly in the first session, we struggled a bit to find the right balance on the car. The programme included various set-up tests and, probably partly because of the high temperatures, my car felt rather nervous. Between the two sessions, we decided to make a few changes and in FP2, with lower temperatures, things improved, also in terms of how we compared to our competitors. My best lap wasn't perfect, I made a small mistake. Overall, the work we did today produced positive results and this evening's analysis of the data will deliver a lot of useful information to help us improve for qualifying and the race."

Pat Fry: "At the Yas Marina track, the first and third practice sessions don't tell you much, because of the effect of the high temperatures on the tyres. Usually, the level of grip gets better as the sun sets and in FP2 the track and air conditions produce a more similar picture to the one we can expect in the race, allowing for a better idea of car balance and a clearer understanding of the tyres. Here, it's important to find the right compromise between aerodynamic and mechanical grip for the twisty section, trying to make turn-in easier in the corners while also have good top speed on the long straights. As was the case in Brazil, tyre management will be a key factor. For the first time at this track we have the Soft and Supersoft tyres and this choice opens up various strategy choices, also taking into account the limited life of the softer compound. In the second session, an electrical problem meant Fernando had to park the car on track and the guys are now fixing the problem for tomorrow's practice. This incident is further proof that reliability, down to the smallest detail, is a major challenge for all teams, even right to the last race. It won't be an easy weekend, but we'll be trying to score as many points as possible, given that every position is worth double."