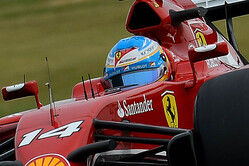 Fernando Alonso: "Today we did some good testing, helped by the track conditions, which were definitely different to previous years. It's possible the races they had here a few weeks ago helped to clean the track and as far as grip levels were concerned, we didn't have too many problems. In the second session, the situation was slightly worse because of the strong wind, but that was expected over the weekend and did not affect our work too much. The Soft compound seems to last less than expected, but we are well aware how much tyre performance can change as the track evolves. Certainly the race looks like it will be different to past editions, because the likelihood of two stops opens up different strategic possibilities. Today we tried the Virtual Safety Car system and I think that, for a first try it went well, although there is still much to do. All us drivers agree it's a very worthwhile idea, we just need to get used to it."

Kimi Raikkonen: "The day began with a few difficulties in the first free practice session, in which we concentrated on analysing various aerodynamic components. I did not feel comfortable with the set-up we had and controlling the car wasn't easy. In the afternoon, we made some changes and the handling of the car was definitely better. On the Medium compound, I managed to do a good lap and I think if I had not been held up in traffic, I could have done even better. We still have a lot of work to do before tomorrow's qualifying, but the improvement we saw from one session to the next seems to indicate we are going in the right direction. We just have to continue doing our best."

Pat Fry: "Contrary to what we saw at the two previous races here, today the track surface was less slippery and that means we can expect a further evolution in terms of grip. However, before we can confirm anything, we must wait and see over the next couple of days. Overall, it's been a positive day and we managed to complete our planned programme without any problems, including carrying out some tests aimed at 2015. Obviously, the priority was working on the settings of the two cars, looking at finding the best aerodynamic configuration, working on the power unit control units, so as to adapt them as well as possible to the characteristics of this track. It wasn't easy finding the right balance and a set-up that suited both drivers, partly down to the strong winds which had a major effect during the second session. This evening, the engineers will assess the various solutions we tried today. Tyre behaviour is definitely different to the last race in Sochi: this means we can look at different strategies for the race, while we are aware that we are up against extremely competitive opponents."