Ferrari to try 2015 parts in Austin 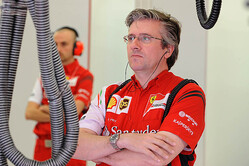 Pat Fry confirms that Ferrari will test various components in Austin this weekend as it looks ahead to 2015.

Currently fourth in the standings, Ferrari appears to have given up its pursuit of (third placed) Williams and is instead looking ahead to next season when it will have a changed driver line-up.

"After the back-to-back races in Japan and Sochi, we've had three weeks to prepare for these next back-to-backs in the States and Brazil," says engineering director, Pat Fry. "The extra week has given us more time to get ready and also to prepare some specific test items. They are all aimed at learning about car performance and trying to improve, but at this stage of the year, it's more with an eye to 2015."

Still coming to terms with the new regulations, Fry insists that lessons have been learned.

"Certainly, our knowledge and understanding has come on a huge amount," he says. "It's also clear, comparing us to our competitors, exactly where we need to improve. We need to work on all areas of the car and we've set ourselves some strong targets for power unit and aerodynamic development, both of which are key. We have to reach those targets to be competitive and that is the main focus at the factory now, as it will be for the next five months."

Looking ahead to this weekend's race at the Circuit of the Americas, Fry is convinced that once again tyres will have a major influence.

"There's lots of high speed flowing corners in the first section with a very long straight and then quite a few low speed corners," he says. "The overriding factor that has dominated the last two races we've had here has been the tyres and the performance of cars in Austin is really going to be down to how well we can get the tyres to work."