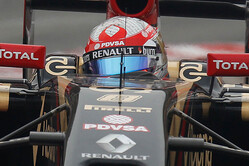 In all honesty, there have been times when one wondered whether the Frenchman might make the next race far less next season, such has been his frustration this year.

However, with the all-conquering Mercedes power unit in the back in 2015, not to mention the fact that his prospects of finding a decent alternative drive are slim, Grosjean looks set to continue with the Enstone outfit.

"Romain is in pole position for that place," revealed Deputy Team Principal, Federico Gastaldi, "and honestly it’s a case of us finalizing a few details.

"We expect to have an announcement very shortly," he added. "Like the technical package confirmation there has been a lot going on in the offices at Enstone, as well as the pits and paddock. It is all looking very good and exciting for the team going forwards."

"Maybe we think it's fun to keep the media speculating!" added Grosjean, when asked why the deal has not been confirmed yet. "Honestly, we're very close to having something to announce but there's no pressure on when we say something."