Austin Q&A with Gastaldi and Chester 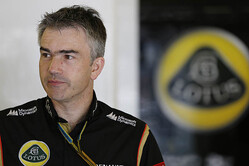 The Mercedes power unit announcement was made recently. Is this the start of a renaissance for the team?
Federico Gastaldi: That is the plan! Obviously it was something that was in the pipeline. Behind the scenes we realised it was time for a new direction and we are very happy we can finally confirm this publically. Mercedes AMG High Performance Powertrains have already made a positive impression and we believe that they will be a key ingredient for future success. It has become obvious this year that they have the most competitive package on the engine side. Their strengths, allied to ours, will form a potent combination in 2015 and create a special E23 Hybrid package. The partnership also forms a key ingredient for the long-term future of Lotus F1 Team.

Are we closer yet to know who will be driving the Mercedes powered E23 Hybrid next year?
FG: Romain is in pole position for that place and honestly it's a case of us finalizing a few details. We expect to have an announcement very shortly. Like the technical package confirmation there has been a lot going on in the offices at Enstone, as well as the pits and paddock. It is all looking very good and exciting for the team going forwards.

Does the test for Esteban Ocon show a continued commitment to nurturing young talent at Lotus F1 Team?
FG: Yes it does. We have a rich heritage of giving young talent a chance at Enstone, like Michael Schumacher, Fernando Alonso and Romain. Esteban is part of the Lotus F1 Team Junior programme and obviously a very talented driver. He has shown this year that he can get the job done with a record amount of victories. It was his first year of F3, so to score fifteen wins and take the crown was a special achievement. This is especially true when you consider the calibre of his opposition in Max Verstappen. We recognised EstebanÕs feat by ensuring he got his first taste of an F1 car at Valencia this week, where he impressed everyone with his application and attitude. We are looking forward to working with him as he climbs his way up to the top. It shows clearly that the Lotus F1 Team Junior programme is one of the best in motorsport and delivers exceptional talent.

It is the third time we will race at the Circuit of the Americas. What are your thoughts on the facility and also F1 generally in the US?
FG: It is a tremendous location to race at. There are great fans from the US and Mexico mainly, but also from all over the world. The track is challenging, the drivers and fans love it and of course the US is a major, but largely untapped marketplace for F1. It will take momentum and many more US Grands Prix for F1 to be fully embraced but there is a great will from Lotus F1 Team to reach out to the US race fans and create a special relationship. We hope to put on a great show in Austin next weekend.

What about the provisional calendar for 2015. Mexico should be exciting?
FG: Mexico is a racing country through and through. Since the days of the Rodriguez brothers and of course the great Carerra Panamericana race it has the sport in its blood. F1 will be welcomed with open arms there and I am sure there will be a great atmosphere because the Mexican fans are very passionate. We see many of them at Austin and they make a big, big noise. Mexico is also a strong economic country and there will be great opportunity commercially for F1 over there. The race next year will be a big highlight for sure.

Finally, Jules Bianchi is still very much in everyone's thoughts as we head to the final races?
FG: Yes, very much so and everyone at Enstone as well as everyone in the world of Formula 1 is praying for him. We also had the recent terrible news about Christophe de Margerie who was a close friend of the team. Our thoughts are also with his family as well as those of the other three victims of Monday's plane crash.

How should Austin suit us?
Nick Chester: I think we should certainly be better than in Sochi. It's not so much a power track as some of the circuits we've been to. It's got some high-speed corners that we prefer so it's fair to say we're looking forward to it.

What is the purpose of running with the new nose in Austin?
NC: This will be for evaluation and aero data logging. It's something we're doing as part of our preparations for the E23 Hybrid, next year's car. It won't be the definite launch E23 nose but it is an E23-style nose that we are putting on an E22 for evaluation. We don't expect it to perform as such on the current car as it hasn't been optimised for the E22 but it will still be an interesting comparison.

Will we see it in FP1 only?
NC: Yes, although we are yet to decide which driver will run it.

How far along are we with E23 preparations?
NC: Nearly all of the resources are on the E23 now and a good chunk of them have been for some time. We are starting to laminate the first race chassis which is on schedule. Gearboxes have been cast and will be machined shortly. We have pretty much finalised the cooling system. We have also been discussing various aspects with Mercedes while we finalise the power unit installation. Most of the suspension is designed now, so we are really a good way along.

Have we any insight to the issues faced in Sochi?
NC: We struggled in Sochi and we have identified a few reasons for that. One is that the tarmac was very new and there was a lot of bitumen on the surface, making it very light on tyres. The tyre compounds that were taken to the race, the medium and the hard, were way too hard for Sochi. This was the same for everybody though, not just us. For some teams with a little bit more downforce or more power, they could work the tyres better than we could, so we particularly struggled to get the tyres working well. Even qualifying on the soft tyre, it took five laps to get the tyres to work properly which is not really desirable. That accentuated some of the differences.

Also Sochi turned out to be a circuit with high sensitivity to power. We suspected as much from simulation runs but the extent of it really became apparent when we were there. That made it very tricky for us because for Sector 1 particularly which only has two corners in it, you really need to take wing off but then for Sector 3, you need a lot of wing. We took wing off for qualifying, really to try and improve Sector 1 but then I think we hurt the car too much in other sectors so it was a calculated risk that didn't pay off. Certainly, we've learnt a lot for our return for 2015.

How big a change is it moving to a new engine supplier for the future?
NC: It's a big change. During all the time I've been at Enstone, we're been Renault-powered. It has been that way since 1995 so you get used to working with one supplier. There are obviously differences in how a new supplier works and it's good for us to be challenged in this way. In terms of the car, the regulations changes for 2014 were absolutely enormous, going from a V8 to a V6 turbo. It's actually now easier for us to change power unit suppliers to Mercedes than it was going from V8 to V6 turbo which was a much more difficult transition. Mercedes have been really professional and our working relationship so far has been very constructive.