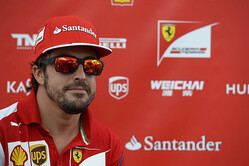 With three weeks before the next race, two topics will dominate F1, Jules Bianchi and who goes where in 2015.

Speaking yesterday, Fernando Alonso, who was been linked with McLaren, Lotus and Mercedes , to name but three, was giving little away.

"I'm not in a hurry," he told reporters when asked when news of his plans for 2015 might be made public. "I understand the curiosity, and I understand, for the fans, the news that can be around the future. But do not worry, relax, enjoy, and when it's time to know it, you will know it.

"My mind is set, for the last two or three months," he added, "and when you know you will understand that probably it was very obvious what I would do."

In a subsequent interview the Spaniard said that he wouldn't be racing for a Mercedes-powered team, which therefore points to McLaren which next year reunites with Honda.

Whilst Alonso has a contract with Ferrari until the end of 2016 it is widely believed that he has been released early in order to make way for Sebastian Vettel. However, the Spaniard further muddied the waters when he said he wanted to do the best for the Italian team.

"My decision was to help this fantastic team, and I'm extremely happy with the things that will come," he said.

Which poses more questions than it answers, the most obvious being; where is Sebastian Vettel really heading?