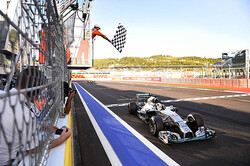 The 1-2 victory is the team's ninth in 2014 and sealed the F1 Constructors' Championship for Mercedes-Benz. This is the first time in 120 years of motorsport that Mercedes-Benz has won the World Championship as a constructor. Lewis' win means he equals the record number of wins for a British driver, set by Nigel Mansell (31). All of today's top 5 finishers were powered by Mercedes-Benz, a fitting result to seal the company's first Constructors' title.

Lewis Hamilton: It was a good day and an amazing weekend. Firstly I'm so proud to have contributed to the work of this great team, to get the first Constructors' Championship for Mercedes-Benz is a huge achievement. Massive congratulations to the guys back in the UK and Germany, it's history for us. Today I had to manage the tyres a lot through the race; managing the fuel wasn't too bad. The car felt great and I didn't have to push too hard. At the end, when Nico was behind, I needed to match his times, which I did. I've thoroughly enjoyed the weekend here in Russia, it's a great place. It's been one of my favourite venues so far this year, so it's very cool to have won the first race here. The fans have been amazing; I didn't know so many people followed it here but they were all there in the grandstands and looked excited! The organisers have also done a great job - the layout, the surface and the whole event; I take my hat off to them.

Nico Rosberg: We are World Champions! I feel so happy for the team and the whole Mercedes-Benz family, today we made history. Thanks to everybody for their efforts, also thanks to the husbands and wives to send us your partners to make this happen. I remember well the hard times we had in this team. So now it's great to be so dominant in our sport. But I'm also divided. Today was a really tough race for me. I just messed up in the first corner. I simply braked too late, which was unnecessary. So I flat spotted my front tyres and it was impossible to continue due to the vibrations. I had to pit, and on the prime tyre I had great pace. In the middle of the race I thought the degradation would start to increase. But very soon it was stable and I was able to push a lot. Then I managed to overtake Bottas. Also still at the end I was able to push, but the team asked me to control the pace as everyone was worried about dropping at the very end of the race. P2 was damage limitation. I really look forward to the last 3 races of the year with this outstanding championship car.

Dr. Dieter Zetsche, Chairman of the Board of Management of Daimler AG and Head of Mercedes-Benz Cars: It is a time of great pride and satisfaction to mark the first ever FIA Formula 1 World Constructors Championship to be won by a Silver Arrow. This victory is the product of many years of hard work combined with great commitment and exceptional engineering skill. And it has additional meaning for a manufacturer like Mercedes-Benz to succeed in a year of technological change. The new rules for the 2014 season gave us the opportunity to demonstrate the technical expertise of Mercedes-Benz on a world stage. Our engineers were able to develop not just the most powerful and most efficient Hybrid Power Unit but also the most intelligent solutions for our W05 Hybrid race car. With 13 wins from 16 races so far, our performance this year has been true to the promise of the Mercedes-Benz brand: The Best Or Nothing. My congratulations go to our Formula 1 team at Brackley and Brixworth on their achievement, to our drivers Nico Rosberg and Lewis Hamilton, and to each and every one of my colleagues who has contributed to this success and supported our Mercedes-Benz Silver Arrows.

I would also like to mark this moment by saying that our thoughts are with Jules Bianchi and his loved ones after his tragic accident at the Japanese Grand Prix. The plight of this bright, talented young sportsman overshadows any thought of sporting celebration today. Thanks to the excellent work of the FIA and the teams, Formula 1 today sets a benchmark standard for safety and I know that no stone will be left unturned by the President of the FIA, Jean Todt, and his experts, to ensure that the right lessons are learned from this tragic incident.

Toto Wolff: This is a great moment for our team but, first of all, we must not forget what happened last week. While we celebrate a hard-earned achievement today, we will not forget what happened to Jules in Suzuka and we will not forget the battle he is fighting at the moment. We are split in two today, celebrating a moment that we have worked so hard for, but this will never take away the sadness at the events of last weekend. Looking at this achievement, it's incredible: I have to pinch myself that we are now part of Mercedes-Benz history. Today, our team won the first ever Formula 1 Constructors' title for Mercedes-Benz and I feel proud and honoured to be part of this group. The foundations of this success were built by Ross and he played such an important role in the team to prepare this success. We have been able to continue that work, making the right decisions, putting the right resources in place and putting the team on an upward slope; today's achievement is the result of that. Well done to every single member of the team in the UK and Germany for this world championship. Of course, the focus will now shift to the battle for the drivers' title and this will stay as intense as ever for the final three races. We have a healthy lead over Ricciardo in third place but nothing will change in our approach: we want Lewis and Nico to race each other hard and respectfully, as they have done so far this year. They have both made a massive contribution to our success and huge credit goes to both of them for the Constructors' title today.

Paddy Lowe: It is a fantastic achievement for the entire team to secure the first Formula 1 World Constructors Championship for Mercedes-Benz. This has been a combined effort of the teams in Brackley, Brixworth and Stuttgart and is the result of many years of dedicated hard work. At this point, I would especially like to recognise the pivotal role played by Ross Brawn in this success and congratulate him, too, on his part in this championship victory. As for this afternoon's race, the biggest surprise was that we were able to run 52 laps on a single set of prime tyres with Nico's car. After Lewis had made his pit-stop on lap 27 and we were able to analyse the tyre wear from his set of option tyres, it did not seem feasible that Nico could make it to the end without stopping again. However, his pace kept on improving and in the end we decided to take the gamble in order to try and secure second place. It worked out and, in my view, it was one of Nico's best ever drives to recover from his mistake at Turn 1. Lewis drove a flawless race and didn't put a foot wrong all afternoon; his was a commanding and controlled win. It is important to underline the huge contributions Nico and Lewis have made to achieving this Constructors' Championship; their competitiveness and dedication keep driving the team forward. Finally, it was a pleasure to welcome an impressive new venue to our sport this weekend and to meet a new community of passionate racing fans here in Russia; congratulations to the organisers who delivered an excellent event.