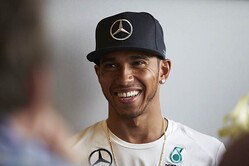 Round 16 of the 2014 Formula One World Championship brings us to Sochi for the inaugural Russian Grand Prix, held at the Sochi Circuit.

Lewis Hamilton: It's difficult to know what to say after a weekend like the one in Japan. As I crossed the line, obviously I was pleased to have finally won at Suzuka - but as soon as we got back to the pits and heard what happened to Jules it suddenly didn't seem relevant anymore. My thoughts and prayers are with him and his family. This weekend is a new experience for Formula One as we head to Russia for the first time. I like a challenge and a new circuit always provides that. Of course, we've run through plenty of laps on the simulator - but you never really know what it will be like until you get out there and feel your way into the track. I'm looking forward to seeing what it's really like and how our car performs there. It felt great in the race in Japan and I'm sure it will be strong again in Sochi, so I'm hoping to keep up this run of results that we've built in the last few races.

Nico Rosberg: My first thoughts at the moment are always with Jules Bianchi and I really wish him, his family and his colleagues all the very best at this difficult time. The weekend in Japan brought a good result for the team but we came away from the race with only one thing on our minds - the well-being of our colleague Jules. Looking ahead to this weekend, it's exciting to be going to the first ever Russian Grand Prix. Formula One has never raced in Russia before, of course. But we did actually do a demo in Moscow a couple of years ago where I drove round the Kremlin, which was really cool. Everybody was really into it - all the Russian fans - so I think there will be a lot of people coming to watch us. It's a new circuit, so we've spent a lot of time in the simulator practising it to learn all the lines and the gears as best we can before going there, which will be important when we first hit the track. I'm looking forward to what I'm sure will be a great first year for Formula One in Russia.

Toto Wolff, Head of Mercedes-Benz Motorsport: I think the whole paddock left Japan feeling numb after what happened at the end of the race on Sunday. I know I speak on behalf of everyone at Brackley, Brixworth and Stuttgart when I say our thoughts are with Jules and his loved ones. As we head to Russia for the first time, what should have been the excitement of exploring new territories for the sport has been overshadowed by the events of Suzuka. The new circuit in Sochi looks impressive and, if we think back to the Winter Olympics, I am sure we will see an event the country can be proud of, with many new fans turning out to see our sport's debut race in Russia.

Paddy Lowe, Executive Director (Technical): First of all, both my thoughts and I'm sure those of the entire team are with Jules Bianchi, his family and our colleagues at Marussia. Suzuka may have seen a strong performance for us, but really that pales into insignificance in the wake of Sunday's events. We all hope for some positive news soon. Now, we head to the inaugural Russian Grand Prix which is an exciting prospect for the sport as a whole. Coming to a new circuit such as Sochi provides an interesting challenge for every team. Although we conduct extensive work in the simulator to prepare as best we can, the weekend will undoubtedly be a steep learning curve for everyone involved. Track evolution will be a big factor, as demonstrated most recently at another brand new venue in Austin two seasons ago. This is part of the challenge of Formula One - and one we all relish. It will be fascinating to see how the relative performance of both the cars and drivers evolve across the weekend and we could be set for a highly entertaining race. We certainly hope that this is the case and that we can put on a good show for the Russian fans at their first home Grand Prix.

Sochi: The Inside Line

The Sochi circuit, located in the Black Sea resort of the same name, is the first purpose-built Formula One facility in Russia and will host the country's inaugural Grand Prix in 2014. Located within Sochi's impressive Olympic Park facility and winding its way around many of the architecturally eye-catching venues that were built for the Games, the 5.853 kilometre circuit will provide a fresh challenge to teams and drivers alike.

Plans for the inaugural Russian Grand Prix first came to prominence in 2010, with construction of the facility falling under the design supervision of Hermann Tilke. The track itself varies in width from 13 metres at its narrowest point to 15 metres at the start-finish line. Running in a clockwise direction, the layout consists of 12 right-hand and seven left-hand corners and combines both high-speed and technical sections.

Sochi has long been Russia's largest and most popular resort, but it has now also emerged as one of the country's top sporting destinations. 2014 sees the city host not only its first Formula One Grand Prix, but also the 22nd Olympic Winter Games and 11th Paralympic Winter Games. It will also be a host city for the 2018 FIFA World Cup.

On the Pit Wall

With any new circuit, teams have no reliance on historical information. Data from other circuits will not be of particular use due to a lack of knowledge of tarmac characteristics, track layout, kerb configuration and so on. Predicting weather patterns, too, will be a relative unknown, with no prior knowledge of know how rain clouds form - i.e. whether they are blown in or form in cells above the circuit - for example. However, some understanding can be gleaned from simulations and video footage, while traditional methods and simulation tools are also much more heavily relied upon. By the time the teams arrive in Russia, each will have simulated thousands of laps of the circuit - ensuring the deepest possible knowledge of what will be believed to be the sweep of grips levels, performance parameters and likely setup configurations required. Initial impressions suggest that the Sochi Autodrom is a more traditional Hermann Tilke designed circuit, with plenty of long straights, relatively flat kerbs and one or two key overtaking zones.

At any new circuit, the best drivers on the grid will come to the fore. They will be the ones who get up to speed the fastest and are able to seek performance gains the soonest while others are still learning the track and trying to understand the tyres. Each step of the race weekend can be viewed as a continual set of building blocks. A driver who gets up to speed faster, be it by a few laps or an entire run, will find himself working a few 'blocks' further ahead relative to the competition. He can therefore begin to look at setup changes earlier, which will naturally bring an advantage when it comes to qualifying and the race. Again, though, it is essential to follow the natural progression of the 'blocks' rather than trying to jump a few steps ahead, as this will inevitably result in a driver losing his way.

The circuit will barely have been used when the cars take to the circuit for the first time during Friday practice, with radical track evolution guaranteed. As an example, the first Korean Grand Prix saw up to six seconds of improvement across the weekend. Compared to the average circuit, which would see a difference of around two seconds, the scale of evolution is significant. The reasons for this are known and understood - but nonetheless inevitable. Amongst these is the quantity of oil rising through the track surface - which is the nature of freshly laid tarmac and can only really be disposed of by driving across it. The tarmac will also move, stretch, grow and generally evolve in shape and stance. In line with track evolution, changes in tyre properties will be a factor - with blistering and / or graining more than likely to across the weekend. The astroturf run-off areas too are likely to raise concerns, with these traditionally coming loose during early running at a new circuit - as seen on numerous occasions over the years. When the sport returns to Russia next season the circuit characteristics will be much more stable - but for the inaugural event it is essential to expect the unexpected and to prepare as much as possible in advance to ensure that the team is on top of the situation.

There is always more time to be gained or lost at a new circuit than at a better-know venue - particularly in the less obvious places. Pit stop loss, for example, will be relatively consistent at a track which has featured regularly on the calendar over the years. This relates to the time taken for a car to enter the pit lane, the team to conduct the stop and the driver to exit the pit lane again and will perhaps vary by around half a second through driver improvement across the weekend. In Sochi, the scale of improvement from the driver could exceed a full second as he becomes more familiar with the procedure on different fuel loads. Although seemingly a small factor - and one which may be taken for granted in more normal conditions - such fine details could prove crucial in a qualifying or race scenario.

The Russian Grand Prix this year forms a back-to-back sequence of races with Japan, which is far from an easy transition to make in terms of both time zones crossed and distance travelled. There is precious little time between the end of one race weekend and the beginning of the next in terms of packing and unpacking freight, setting up for the next race and so on. Particularly at this late stage of the season, human fatigue will inevitably be a factor.