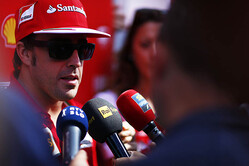 Fernando Alonso: "Today's qualifying was more difficult than usual, or at least more complicated compared to the last two race weekends, when we had been able to fight with the front runners. So far here, we have not been competitive, even though the car seems okay and on the set-up front, we've changed almost nothing. We can't single out any particular bad point because we are losing in all the sectors. The truth is just that the cars ahead of us were quicker. Here, the grip seems to improve with every lap and on top of that, educing the pit lane speed to 60 km/h all points to a one-stop strategy. Even if the Safety Car could mix things up a bit, I think tomorrow, the start and the first corner could define the outcome of the race, and so we must prepare to tackle the early stages as well as possible."

Kimi Raikkonen: "After a difficult Friday, things went better today, the car has improved a lot thanks to a series of changes that worked and we had a good pace. Sure, we can't claim to have ended up where we would have liked, but compared to the start of the weekend, we have made a step forward and this makes me confident for the race. Today, it wasn't easy to put a quick lap together because I still have some difficulties with the front end, especially in the final sector, but tomorrow we will try our hardest to be in the game and make up some places."

Pat Fry: "Yesterday, it was immediately apparent that tyre performance was unusual compared to that at other circuits, both because of the track surface and because of the interaction with the compounds available for this Grand Prix. It is reminiscent of the situation on the first Saturday in Austin, where the best times came after a decent number of laps. Today, as then, the main difficulty was in choosing the right amount of fuel so as to produce the maximum performance while at the same time being able to complete the number of laps necessary to get that best performance. Added to this of course was the effect produced by the evolution of the track. Today's result reflects the pecking order seen last week in Suzuka, with Williams more competitive, the Red Bull closer and a few surprises, such as the two Toro Rosso. Race strategy is looking like being a one stop, but the pit stop window is very wide, because of the low degradation levels. With Magnussen's penalty, we gain a place on the starting grid, but only tomorrow will we know how many passing opportunities this track will produce. There's a high chance of a safety car, if you consider the walls are very close and that there aren't too many escape roads. This can be seen as both a risk and an opportunity and we must be ready to react."