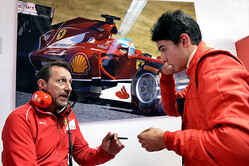 A week after testing for Lotus at Valencia, European Formula 3 champion Esteban Ocon took to the track at Fiorano in a 2010 Ferrari. The test was Ocon's prize for winning the championship, which the Frenchman managed in his first season in the category.

Overseeing the test was the head of the Ferrari Driver Academy, Luca Baldisserri, who said of the 18 year old: "It's always very exciting for we engineers to be there when a young driver gets behind the wheel of a Ferrari F1 car for the first time, because even if we are used to working with rookies, it's a real surprise to see someone take to the track, showing a level of professionalism as demonstrated by Esteban today.

"Despite it being his first time in one of our cars, he tackled the test without making any mistakes and was quick right from the start," he added. "It's not an easy task, especially on an emotional level, because I reckon that driving a Ferrari is a dream for anyone who wants to be a professional racing driver and we hope that today's good results are a good sign for his future."

"It was great to walk around the premises of a great company like Ferrari," said Ocon. "Only by being here can you get an idea of how much history and tradition you can sense from the place. I am very honoured to have had this opportunity. The track is very nice, very technical and varied and the car provides plenty of excitement with all its power and the way it responds immediately to driver input. I would like to thank all the mechanics and the team which supported me and I hope this day will prove useful for my future as a racing driver."