No agreement on engine unfreeze 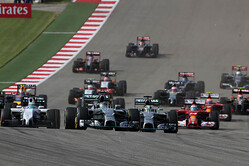 This week's meeting of the F1 Strategy Group and F1 Commission produced nothing of real worth.

Whilst it was agreed that the sport has seen the back of Bernie Ecclestone's universally hated double points, and plans to introduce re-starts following Safety Car periods were scrapped, there was no agreement on the more pressing issues facing the sport.

Ecclestone had already revealed that his controversial double points idea - initially proposed for the final three races of the season - wouldn't see the light of day again, but Charlie Whiting's idea of re-starting races following Safety Car periods was rejected by teams and drivers, mainly on safety grounds.

However, this week's meeting of the F1 Strategy Group, which is comprised of the six bigger teams, Ecclestone, FIA president Jean Todt and the F1 Commission, on which all the teams are represented, as are circuits and sponsors, didn’t see progress in terms of costs or an engine unfreeze.

Heading into the winter, with Marussia appearing to have gone to the wall, Caterham fighting to survive and three other teams pleading (F1) poverty, the sport is seeking a way in which to reduce costs and also the gap between the haves and have-nots.

In terms of the F1 prize pot, Ecclestone has said that it cannot be increased and that for the smaller teams to receive a bigger slice would mean the bigger teams agreeing to take a smaller cut.

Similarly, self-interest and the 'I'm alright Jack' mentality dominates discussion of an engine unfreeze, Mercedes, in some ways understandably unwilling to allow its rivals to try and close the gap.

Therefore, one might view this week's proposals - which are now put forward for the World Motor Sport Council next week, as tidying the deckchairs on the Titanic.