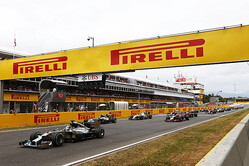 The three smaller F1 teams have written to Bernie Ecclestone calling for a meeting in Abu Dhabi this weekend to discuss the way the F1 financial cake is divided.

The letter, signed by Force India, Sauber and Lotus, and which has been sent to rival teams, Jean Todt and CVC, and written by (Force India deputy principal) Bob Fernley, expresses the teams' fears that the sport is heading in a direction in which the grid will be filled with customer cars and "Super GP2" cars.

"In our common interest and for a sustainable future of the sport, we request you, together with the other stakeholders, to implement a more equitable distribution," they write.

"Since Austin, Lotus, Sauber and Force India have been in communication with Donald and your good self in order to highlight the critical situation independent constructors in Formula 1 are facing today," it continues, referring to Donald Mackenzie of CVC.

"From our meetings we noted positively that our concerns were acknowledged and there was a basis for a constructive dialogue. However, after our meeting in Brazil we clearly see the direction of Formula 1 towards customer cars / Super GP2. It is equally clear that the Strategy Group has no intention at all to reduce costs.

"The costs of the power unit together with the installation costs amount on average amongst us three to $43m. This clearly shows that 70-80 percent of the FOM income has to be allocated to the engine. For us, as engine customers, the engine technology, i.e V6 or V8 turbo-charged or hybrid, is of much less significance, as opposed to engine manufacturers, who are using Formula One as a marketing tool to showcase high-end technology.

"Unlike manufacturer-owned teams, our core business is Formula One. Yet, we have no choice but to spend most of our income on the engine, and the remaining 30 percent is by far not enough to construct, enter and run a team over a 20-race season.

"The generation of further funds though sponsorship is achievable but we all recognise that other global sporting competitions are chasing the same sponsors which are at lower levels than even two years ago. It is challenging when the Commercial Rights Holder of F1 is also competing against the teams.

"The current skewed position is a direct result of the massive increase of costs and the lack of willingness to reduce the costs," it continues, revealing that of a $835m prize fund this year, $412m is distributed between the four teams - Ferrari, McLaren, Mercedes, Red Bull and Williams - in the Strategy Group.

"We cannot accept the current distribution of funds in view of the massive increase of expenses. We understand that the distribution is based on our bilateral agreements. It is, however, known to us all under which circumstances we signed these deals.

"The shareholder's focus during the negotiations was on securing the co-operation with big teams in view of the planned IPO; we were effectively given no room for negotiation. Furthermore, the impact of providing various share options to key people and entities may well have clouded their judgement in respect of creating what is effectively a questionable cartel comprising, the Commercial Rights Holder, Ferrari, Red Bull, Mercedes, McLaren and Williams, controlling both the governance of Formula 1 and apparently, the distribution of FOM funds.

"Whilst the FIA are involved in The Strategy Group, they are impotent to act, as demonstrated in the recent cost control process which saw the FIA issue a media statement confirming their intent to impose cost controls and their subsequent climb down when over ruled by the CRH, Red Bull, Ferrari, Mercedes, McLaren and Williams.

"F1 remains one of the strongest global sporting platforms. However, circumstances within and around Formula 1 have changed, and our collective inability to react is damaging the sport. Pursuing a direction towards third /customer cars is creating fears. Such a move, representing a misuse of power, will not only change the DNA of Formula 1 but also damage the value of our enterprises and lead to job losses.

"A two-tier system can only be considered a short-sighted vision. It is evident that the current developments are dramatically reducing the value of Formula 1 and massively undermining its reputation as a sport.

"Our teams have, like the others, a clear intention to continue as constructors in Formula 1, however, unlike the manufacturer teams, who could exit on the whim of a board decision, Lotus, Sauber and Force India F1 are bound to the sport as it is their only business focus. The issues we are facing are related to financial matters which can only be resolved by financial measures. In our common interest and for a sustainable future of the sport, we request you, together with the other stakeholders, to implement a more equitable distribution."

It would appear that the action this weekend, as is Austin and Interlagos, will not be restricted to the track. However, it is likely that Ecclestone and CVC will want to deal with this once the season is over and the focus has turned away from the sport.