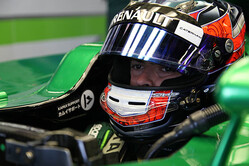 Finbarr O'Connell, CaterhamF1's Team Principle, has sought to clarify the many claims by drivers stating to have been "offered" the CaterhamF1 Team drives this weekend in Abu Dhabi.

"The reality is that we were approached by several drivers and their representatives regarding the availability of the seats for this weekend," said O'Connell. "The level of interest was really very high. But, ideally, we wanted drivers who had experience of the car and working with the team.

"We spoke to both of the drivers who are racing for us very early on in our plans for this weekend. Having already used three of the maximum four race drivers in the season, Will Stevens was offered the remaining seat first due to his experience gained in the tests he had done for the team and his time working with the engineers in the simulator at Leafield.

"Clearly, Will had to consider how he wished to be linked to the team and we are delighted with his belief in and support for it.

"The British public now has another British flag on the pit wall and another British driver to support. We signed a contract with Will well before this weekend's race and only had to wait for FIA approval for his Super License to announce him.

"We spoke to Kamui, as he was one of the team's existing drivers, and as soon as it was clear he was available we signed him too as we were keen to capitalise on his experience.

"We are delighted with the performances of our drivers over the weekend so far and that of the team members, our Human Engine, all of whom have rallied to the team's cause and demonstrated the team's fighting spirit and tenacity to continue.

"Considering where we were a short time ago, it is gratifying to know there was so much interest as regards a seat in a CaterhamF1 car!"