Stevens to test with Caterham in Abu Dhabi 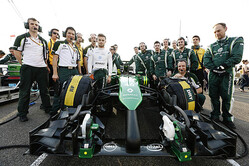 Following a successful weekend in Abu Dhabi, Caterham is to stay on for the two-day test with Will Stevens at the wheel.

The Leafield outfit, which was forced to resort to crowd funding in an attempt to show case the team to potential buyers against the backdrop of a Grand Prix weekend, saw Stevens finish 17th, whilst teammate Kamui Kobayashi was forced to retire following a vibration.

Nonetheless, throughout the weekend administrator Finbarr O'Connell has appeared enthusiastic, insisting that there is serious interest in the team. His faith in the possibility of saving the outfit is demonstrated with the decision to stay on for the test.

"My discussions with potential purchasers are continuing and showcasing CaterhamF1 at Abu Dhabi has shown prospective purchasers the spirit and commitment of our race team which is the 'human engine' of the team," he said.

"I am very pleased to have the opportunity to spend more time in the car this week after completing my first F1 race yesterday," said Stevens. "I'm keen to get as much mileage as possible under my belt in order to further my chance of securing a drive for next season."

"After a solid first race weekend, it's good for Will to have more time in the car this week here at the test," added Gianluca Pisanello, Head of Engineering Operations. "He will be able to put all the experience he gained at the weekend to good use and continue to improve and understand the car. His feedback will be very valuable to us. We will also have the opportunity to test the 2015 Pirelli tyres for the first time and gather plenty of data, which will give us valuable experience and is certainly a very useful way to end the season."