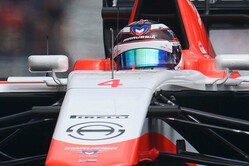 A late bid to get Marussia to the Abu Dhabi Grand Prix, and thereby possibly qualify for the prize money earned courtesy of Jules Bianchi's points in Monaco, proved abortive.

In light of late talks with potential investors such was the positivity at the progress made that plans were put in motion to get the team’s cars and personnel out to Abu Dhabi just a day ahead of the start of the GP weekend.

Speculation regarding the possibility of the team racing was further fuelled by reports that Ferrari personnel usually assigned to the Banbury-based outfit had been spotted at the Yas Marina circuit wearing Marussia team clothing.

However, with the talks looking increasingly unlikely to result in an eleventh-hour deal, the Banbury-based team, which went into administration recently, pulled the plug.

"Devastated for everyone involved at Marussia in the past 24 hours that the hard work trying to get to Abu Dhabi didn't work out as we hoped," tweeted driver Max Chilton.

Final confirmation of the team's failure to make it to the season finale came shortly after it was revealed that Bianchi, having been brought out of his artificial coma, is now being treated back in France.

Meanwhile, it has been revealed that in a bid to get Caterham to the grid, Bernie Ecclestone helped out.

"They wanted to go, so we've transported them at no cost to them," he said. "We've at least helped them to some degree, something we need not have done. We've even chartered another plane to take them. We've gone a little bit over the top, but anyway, we've done it."