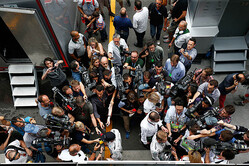 Bernie Ecclestone has revealed he is planning to take over media accreditation for Formula One races to put the brakes on the proliferation of online media in the paddock according to an article in the CityAM newspaper by Christian Sylt.

It isn't a move that will affect the vast majority of F1 fans out there but it will be significant to a small number of them and they are the very ones Ecclestone has in his sights.

Pitpass hears that some members of the media are part-time at best and even have largely commercial, rather than editorial, roles. Both are blatant breaches of the accreditation criteria of the FIA and it is fuelling Ecclestone's desire to take back online media accreditation which Formula One Management (FOM) previously controlled around a decade ago.

"We will probably take over media accreditation. We always used to do it and now we don't. I'm going to have a good look at it," says Ecclestone.

The news sent out waves of concern as some speculated that Ecclestone may decide to charge journalists for media access and could remove the credentials of anyone who writes pieces which are overly aggressive or critical of F1.

One notoriously outspoken blogger claimed the reports "are quite obviously flawed. The Commercial Rights Holder, Ecclestone has no influence over accreditation." He was so flustered that he didn't read the article closely enough to see that it refers to Ecclestone "taking over" the media accreditation so it is irrelevant that he does not currently have influence over it. Clearly exasperated, the blogger resorted to name-calling and fabrication in his article which only serves to highlight the raw nerve which Ecclestone's comments touched.

It is understood that Ecclestone's ire centres on clause 3.2 of the F1 media accreditation criteria which refers to websites and states that "the representative journalist must be (i) a full time professional journalist with a national press card (or equivalent)." Ecclestone says that the current measures are not stringent enough.

"Choose your race for free, enter the paddock, meet the drivers. How do you do it? Set up a website. I'm going to have a good look at the accreditation because it is a bit of a joke."

FOM is on track to have a busy winter poring over the details of the accredited media and it is thought that the new application benchmark could focus on the longevity of the outlet.

The news follows Ecclestone's recent controversial comments that F1 should focus on older fans. One reason why he may not be a big fan of the seemingly endless supply of new websites which are springing up is that they tend to use 'F1' or 'Formula 1' in their name. These terms are registered trademarks owned by Ecclestone's firm Formula One Licensing (FOL) and, as Pitpass (established in 2002) reported in April, FOM's regulations make it very clear that they can not be used in domain names. Accordingly, if websites use them in names which could be confused with F1 itself then lawyers are engaged to deal with it which takes time and costs FOL money.

The media's ease of access to the paddock also runs completely counter to Ecclestone's strategy of host cities paying a huge premium for a place on the F1 calendar and sponsors doing the same to become official partners of the sport. Both sponsors and circuits pay hundreds of millions of Pounds for this privilege which also entitles them to a certain number of paddock passes so the last thing that Ecclestone wants is for them to see how easy it is for media to gain access.

Ecclestone's comments were not restricted to online media as he also suggested that there is a good reason why F1 reports in the sports sections of newspapers often bear a striking similarity to each other. "I speak to the normally nice journalists. They say to me 'can we have an interview with you?' and I say 'wait a minute, maybe one of the others wants it.' They say 'don't worry about it we will give it to each other.' So they all have the same thing. So why do they all need to go?"