Kaltenborn: There is some agenda here 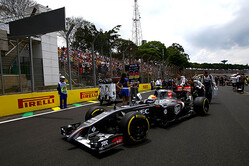 Sauber boss Monisha Kaltenborn believes that F1's powers-that-be have an agenda to rid the sport of smaller manufacturers.

The Swiss claims that the sport no longer wants smaller constructors building their own chassis but instead wants teams buying packages from the bigger outfits.

As the 2014 world championship title heads down to the wire in Abu Dhabi in two weeks it is the fate of Sauber, Lotus and force India that is causing concern in a week that saw Marussia finally go under and Caterham resort to crowd funding.

Numerous meetings involving the teams, engine manufacturers and Bernie Ecclestone resolved nothing, the F1 supremo admitting that those involved couldn't even agree on when the next meeting should be held. Interestingly, he also dismissed claims that the sport is in crisis, just seven days after he said it is and that it was his fault.

Moments before the start of today's race, various parties could be seen deep in conversation, and it was clear they were not talking set-up or race strategy.

"The agenda seems to be that people are looking at four or five names to remain," Kaltenborn told reporters this evening. "Looking at the proposals which have been made, we have to believe there is some agenda here.

"When ideas are offered to us of a year-old chassis or engines which maybe are a different specification or whatever, a different series, there must be an agenda," she added.

"We don't know whose agenda it is," she admitted, "but the fact is it cannot go on like this. It's not the way we want to work or can work. Those ideas are ideas. But that tells you where it is going, the more these ideas are coming up, the more we three get the feeling that maybe some people don't want us to be around and maybe the sport is supposed to be changed in a very different way."

Amidst claims that Ferrari and Red Bull have said they are willing to provide a third car in 2015, others believe there is a clear drive to see the sport go forward with five constructor teams and five customer teams. Not so, argued Cristian Horner.

"Red Bull's position is we want to see a full grid of two-car teams," said the Red Bull boss.

Asked about the claims that his team has already accepted the idea of providing a third car in 2015, he replied: "The numbers haven't dropped significantly low enough and we haven't been requested by the promoter to run a third car. Our preference is we have at least 10 healthy competing two-car teams."