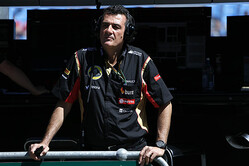 Were any mountains climbed in Austria?
Federico Gastaldi: I would say we got half way up it! Pastor had arguably his best race of the season so far. He showed that he could fight for points and he was actually unlucky not to get his first of the season. I would not say that we came away with too much satisfaction because we were not rewarded with points but for Pastor the maximum was extracted from his race in Austria, so positives could be taken. Pastor was one of only four drivers to achieve his theoretical best lap in qualifying which shows when everything is right he can deliver. The team fought back with typical spirit from a really tough time in Montréal which says a lot about the team and the spirit we have. This gives us a good platform to achieve our aims and objectives for Silverstone, which is to add to our points tally. But first we have to match the slower speed corner performance of the E22 to the high speed performance.

Were you impressed by Romain's tenacity from the pit lane start in Austria?
FG: Yes I was. It is never easy coming back from the technical set back he suffered. Yet Romain showed the fighting spirit which he is famous for and which the team really appreciate. He made easy work of those immediately in front of him but then had some brake issues like a lot of our competitors did during the race. Romain remains upbeat and he knows that although it is taking longer than anyone expected, he can exploit the potential that exists in the E22. He is as hungry as ever.

Silverstone is not too dissimilar to Barcelona in that it is a technical circuit albeit quicker in nature. What can we expect back in England?
FG: The momentum we got from the Spanish Grand Prix and the test afterwards was forgotten slightly after the tough three races since then. But we know that at a track like Silverstone we should be able to see similar performance and exploit the capabilities of the E22 and the powertrain package with the help of Renault Sport F1.

Will racing at home and so close to the factory be an advantage?
FG: It is always nice to come to Silverstone, first and foremost because it is the home event for the factory and we get so much support. It is also good to race at iconic venues like Silverstone which has been hosting World championship Grands Prix since the start in 1950. It is very important to keep the heritage and history of circuits like Silverstone, Monza and Monaco going. It is part of the fabric and lifeblood of the sport.

From a motivation point of view we never lack that, wherever we race. But still I suppose there is an added ambience to a race that is on our doorstep. We want to achieve something for everyone at Enstone to have an extra special spring in their step on the Monday after the British Grand Prix.

Finally... things are going well in the World Cup for your home nation of Argentina so far. Any predictions?
FG: I never predict! So far so good though but we have three more matches until the final. The quarter finals are over the Silverstone weekend but I doubt I will get the chance to see much if we are playing. Of course I hope we win though. At least we won't play England which might have put me in danger at Silverstone! 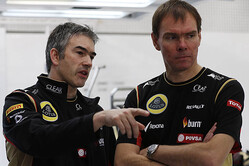 After an uphill struggle in Austria, Lotus F1 Team Technical Director Nick Chester welcomes the team's home round at Silverstone.

Austria wasn't a pleasant experience for us. Was there anything to smile about?
Nick Chester: The main positives were the performances of the drivers, especially Pastor, who did a great job over the weekend. The car wasn't working as well as we'd like, particularly in the low speed corners, but he drove well in qualifying and the race. Twelfth wasn't where we wanted to end up but he did a pretty good job. Obviously it was a struggle for Romain having to start from pit lane due to a gearbox change caused by an ECU reset and he was further compromised by power unit sensor failures during the race.

Should Silverstone be better for the E22?
NC: Obviously Silverstone is a very different track to Austria, with many more high-speed corners that will suit our car better. We've also got a few updates, including a front wing and floor, some different combinations of aerodynamic parts to try and some new set-up concepts to explore. It's a home race for the team so we'd like nothing more than to put on a good show in front of our factory staff and all the loyal fans in the grandstands.

Are we getting the most from the 2014 tyres?
NC: A lot of teams seem to be struggling to consistently get the best from the tyres this year. At some events certain teams and drivers get it right, only to drop down the order at the next event. It's one of the challenges we have every season, to maximise tyre performance from the latest cars, but this year seems to be particularly difficult. We do have very different cars this year and we also have very different tyres so it's an area that has a lot of potential for improvement as, after all, the tyre is the only part of the car in contact with the road. We've shown the car can work well on the medium and hard tyres at Barcelona, another high energy circuit, so that gives us added confidence for Silverstone.

Would you class Silverstone as a power circuit?
NC: Austria and Montreal are critical circuits in terms of power. Silverstone on the other hand has a larger percentage of time spent in corners so engine influence is more diluted and the high-speed corners mean that downforce plays a bigger role.

How is the quest for low-speed performance progressing?
NC: We have done a lot of work on the rig and mechanically the car is performing well and comparably to our recent cars. Now we are paying more attention to other areas such as aerodynamics and tyres. It's a case of narrowing it down and hopefully making significant improvements along the way.

Silverstone is close to Enstone, does that help with developments?
NC: It's easier to get new parts to the track, so that is an advantage in terms of any last minute developments as you can get them straight down the road. However teams are taking whatever upgrades they can to each and every race so Silverstone is not particularly biased in terms of upgrade packages. Barcelona always has a flurry of new parts simply because it's the first European round. The pace of F1 means that no-one sits on a development if it has been shown to offer an advantage during in-house tests and simulations.