Lotus duo look ahead to Austria 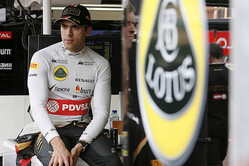 Romain Grosjean previews the Austrian Grand Prix, looking forward to a circuit he's never driven before, hoping to harness the progress made with the E22.

What's your outlook heading to Austria?
Romain Grosjean: I am positive. Even though the end result in Canada might not show it, we've actually made good progress with the car and it's starting to feel like a real racer in how it handles and how all the systems feel. This is very important to me as it helps you get the most out of the car through every corner to make the most of every lap. Certainly at the start of the season this new generation of car was not the easiest or the most pleasurable thing to drive, but I'm being won round! The feel of the car is an important aspect of the improvements being made so it's another piece in the jigsaw.

Have you driven the Spielberg circuit before?
RG: Competing in the Grand Prix will be my first experience there, which is a pretty cool way to get to know a track! It looks like quite a fun lap with some high speed sections and not too much low speed stuff - which hasn't suited our car so far this year. The track has a bit of undulation too, which is always fun as a driver. A downhill approach to a corner means you have to drive it quite a bit differently than if it's an uphill approach and Spielberg has both of those. It should be fun.

How do you prepare going to a track that's new for you?
RG: There's a lot you can do with simulators, watching on board laps from other people and going through data and predictions with your engineers as well as driving the track on the Xbox! That said, nothing beats getting in the car and actually driving it for real. I'll be pretty excited at the start of FP1 as that's when I'll really know what sort of track it is.

How do you work on set-up at the same time as learning a new track?
RG: You very quickly know what you want from the car and how to put together all the corners which make a circuit that's new to you. The objective for learning a track and setting up the car is to go as fast as possible so for both it's all the same goal.

How frustrating was it to retire from the Canadian Grand Prix?
RG: You never want to stop racing so it wasn't the best. That said, it was a pretty exciting end to the race so it was good to watch it as it happened! Our target is to be part of the battle of fighting for points positions so we need to ensure we don't have any more problems with the car. We're making definite progress with pace, how the car feels and generally with reliability too, so it was frustrating that there was an issue with the rear wing. It's another lesson learnt and we will come back stronger for Austria and beyond.

How competitive do you think you can be in Austria?
RG: We won't know for sure until we've been out on track, but I don't think the circuit should be as much of a challenge to us as Monaco or Montreal. Certainly there are fewer low speed corners which seem to have been more difficult for us this season and the downforce level could suit us better too.

How has it been working with a new team-mate now you have a good number of races together?
RG: Pastor's a great guy and easy to work with. We're both positive and proactive and know what we want from the car and the team. He's fast too so it keeps me on my toes to beat him!

What are your thoughts on revising the weekend format for Grands Prix?
RG: As long as there's a Grand Prix and qualifying session, that's the main thing! Whatever happens, it will be the same for everyone. I quite like the idea of a practice session late on Friday as it means I won't have to get up so early! Let's see what happens.

After seeing his first points for Lotus slip away in Canada, Pastor Maldonado is happy to be heading back to Austria for F1's first visit since 2003...

What are your thoughts ahead of Austria?
Pastor Maldonado: I know the track, but it was maybe ten years ago when I last raced there and it will be new for me in an F1 car. I think it should be quite good for the E22. It looks like the circuit doesn't have too many low speed corners and the downforce and set-up is similar to Barcelona, which should help us. We will work hard to solve the problems we had in Canada so that we can reach our targets in Austria. I'm certainly optimistic Austria will suit us better than the last two rounds.

What were the positives and negatives from Canada?
PM: The main positive was that we were fighting for points, easily. The strategy was quite good: Starting on prime tyres and planning only one stop. It was difficult in terms of grip at the beginning and we lost some places, which we expected because the other guys were on super soft tyres. But the pace came and I was competitive. We started 17th and were up to eighth place. Then we had a power unit problem and had to retire. I know we've had retirements before, but this was particularly difficult as we have really made progress and we could have finished well despite starting the race from so far back.

How is your morale after two tough races?
PM: I am very motivated. I think we have some good weekends ahead of us and there are still so many races to go. The European part of the season is very important for us, so let's push hard, do our best and for sure we will be in the points soon.

Do you like racing in Europe?
PM: I like to be racing anywhere! I have raced for many years in Europe and so many of the junior categories are there. Of course, I would love to race at home too, but racing anywhere is what you want to do as a race driver. I would race on the moon if there was a race track there!

What do you remember about your last race in Austria?
PM: It was in Formula Renault and I finished on the podium. Actually I think I won, but I don't remember to be honest! It's a high downforce track. Most of the corners are very quick, especially in the second sector. It's a lot of fun to race there and I'm happy to be going back.

How is the relationship with the team?
PM: We all know what we have to do and we are all pushing hard. Yes, we can all get frustrated, but ultimately we all want to achieve success so we remain positive. We can see how much improvement there has been with pace from the car and once we have all the reliability issues sorted we'll be regularly fighting for points. Once we're there, the next target is to fight for more points and then podiums. We've seen that the Mercedes are not perfect and can be beaten. Even they had reliability issues in Canada.

Given the start to your season, does your outlook change?
PM: No, I still keep pushing and it's still possible to achieve good things this year. We have had a third of the season which has been a challenge - a big challenge - but we still have two thirds of the year to go with many circuits which should suit our car. You arrive at every track with the target of having the best weekend possible and finding as much performance from the car and yourself. This does not change if you've had a difficult last weekend in the car. I can't wait to get out in FP1 in Austria.