Hamilton to focus on simulator ahead of Austrian GP 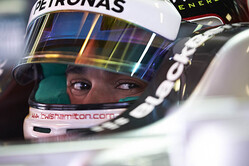 Lewis Hamilton has admitted that he will be spending more time than usual on the Mercedes simulator ahead of the forthcoming Austrian Grand Prix.

The last Grand Prix on the Zeltweg track took place in 2003, four years before the Briton made his F1 debut with McLaren.

The Mercedes driver, still reeling from Sunday's technical problems which saw his second DNF of the season and left him 22 points adrift of his teammate, admits he knows virtually nothing about the classic Austrian track.

"Years and years ago when I was probably 13, I played it on a computer game," he told the Guardian, "but once I get on the simulator, I will learn quickly.

"I don't know which way Turn One goes if I am honest," he continued, "but I will find out before I get there.

Nico has driven it before in Formula BMW, I would have thought. But I will be on it for the next one, doing my best."

Indeed, teammate Rosberg raced on the circuit back in 2002 on his way to winning the Formula BMW title, but he could only manage 5th in one race and 17th in the other.

"I just want to be ready for the next race," said Hamilton. "I have a lot of training planned and I am in the simulator.

"I'm two DNFs down. That's almost 50 points I've lost. I'm going to have to recover them somewhere else," he added, a possible reference to the season finale in Abu Dhabi which is (controversially) worth double-bubble.

"The team will be flat out trying to understand what the issue is," he said of his Montreal malady. "The guys at the factory are already analysing it and they will sort it out. I just said to the guys that this isn't a day we all hoped for but we have to take a step back and realise what an amazing job we have all done. We just have to keep doing what we have been doing. This day will make us stronger as a team.

"You are always trying to find the next thing to get yourself ahead but every time you do, it is shared with the other person," he added, the 'other person being the guy in the other Mercedes and currently leading the championship.

"It is very, very hard. It is the same on both sides but I will have to keep pushing. There is nothing you can keep back unless you don't drive fast in practice. Then you are only harming yourself. I just have to keep going faster."